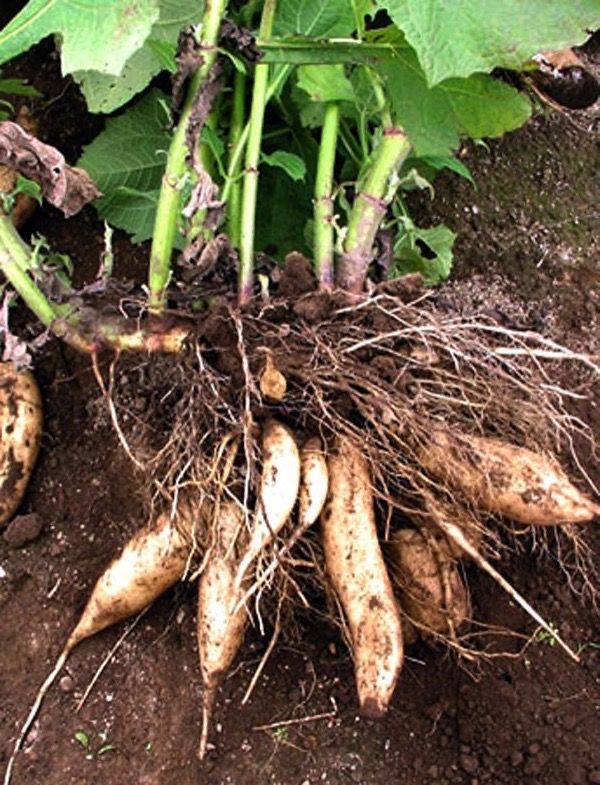 The yacón is traditionally grown in the northern and central Andes from Colombia to northern Argentina for its crisp, sweet-tasting, tuberous roots. It is closely related to the sunflower and Jerusalem artichoke.

The root can be eaten raw or cooked. When first harvested, the root can taste somewhat starchy, but it soon becomes sweet, crisp and juicy and is delicious eaten raw. The flavour is further improved by exposure to the sun although some of the crispness will be lost. The root can be eaten like a fruit or diced and added to salads. The skin has a somewhat resinous taste so it is usually removed. The cooked root retains is sweetness and crispness. Individual roots can weigh up to 500g. The nutritional value is low because the root contains a high quantity of inulin, a carbohydrate that the human body cannot utilize. The grated pulp of the root is squeezed through a cloth to yield a sweet refreshing drink. This juice can be concentrated to form dark brown blocks of sugar called ‘chancaca’ in S. America. Leaves and stems of yacon are cooked as a vegetable. They contain 11- 17% protein, dry weight.

For best results, this plant requires a warm position in a deep rich soil though it survives even when growing in poor soils. Plants are fast-growing. In S. America, they succeed in areas with annual rainfall varying from 900-3500mm (35-138ins), though are likely to succeed with less rain in temperate zones. The yacon is cultivated for its edible tuber in the Andes, and is sometimes used in sub-tropical summer bedding schemes in Britain, though it is not very hardy.

The top growth is killed back by frost but the tubers can tolerate at least light frosts. Plants are unaffected by day-length and so can produce good yields of roots in temperate zones. One report says that plants take six to seven months to produce a crop from planting out, though they have cropped quite well with a five month growing period in southern Britain. The roots are brittle and must be harvested with care to avoid damage. Yields of 38 tonnes per hectare have been recorded in South America, whilst yields of over two kilos per plant have been achieved outdoors in Cornwall. The harvested roots can be stored for several months. Plants have not been selected for flavour or yield, some roots can be exceedingly sweet whilst others are fairly bland. Polymnia edulis might be useful in agroforestry because it succeeds under trees, though in the relatively sunless climes of temperate zones the plants are not likely to do well in such positions.

The flowers are hermaphrodite (have both male and female organs) and are pollinated by insects.

Seed are sown in mid-winter (in a warm greenhouse in colder climates); only just cover the seed. Prick out the seedlings into individual pots as soon as they are large enough to handle and plant them out after the last expected frosts. Consider giving them some protection such as a cloche until they are growing away well. Plants do not usually produce flowers in Britain and therefore seed has to be obtained from other countries. The plant forms two distinct types of tuber. Large tubers, usually on thin roots 2-5cm (1-2ins) long, are used as storage organs and do not have the capacity to form new shoots. These are the tubers that are usually eaten. Smaller tubers are formed in a cluster around the stem. These form the shoots for the following year’s growth and so are the ones that should be stored. Dig up the plants in the autumn once the top growth has been cut down by frost. Remove the large tubers for food, cut the main stems back to about 10cm long and store these stems with their cluster of small tubers in a cool frost-free place. Do not let them dry out. Pot them up in early spring in a greenhouse. When they come into active growth divide each cluster into individual shoots with their tubers attached and repot these. Plant them out in late spring after the last expected frosts. Cuttings of basal shoots in early spring in a warm greenhouse. Harvest the shoots with plenty of underground stem when they are about 8 – 10cm (4”) above the ground. Pot them up into individual pots and keep them in light shade in a cold frame or greenhouse until they are rooting well. Plant them out in the summer. 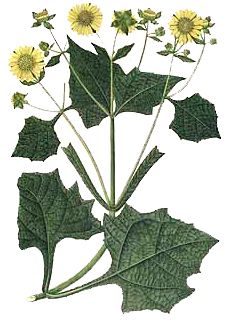