Dioscorea polystachya (Dioscorea batatas – Decne.) is a species of flowering plant in the yam family known by the common names Chinese yam and cinnamon vine. The tubers are edible and usually cooked. They have a floury texture with a very pleasant flavour that is rather like a potato. The tubers can be boiled, baked, fried, mashed, grated and added to soups. They store well and for a long time, and can also be left in the ground and harvested as required in the winter. This is a top quality root crop, very suitable for use as a staple food. An arrowroot can be extracted from the root, though this is not as good at binding other foods as the starch from D. japonica. The root contains about 20% starch. 75% water, 0.1% vitamin B1, 10 – 15 mg% vitamin C. Fruit. Each plant produces one or more spindle-shaped or cylindrical tubers. The largest may weigh 10 pounds (4.5kg) and grow one meter underground. It can be an invasive species in some areas – please check your local conditions if this is of concern.

The Chinese yam, called Shan Yao in Chinese herbalism, is a sweet soothing herb that stimulates the stomach and spleen and has a tonic effect on the lungs and kidneys. The tuber contains allantoin, a cell-proliferant that speeds the healing process. The root is an ingredient of “The herb of eight ingredients”, traditionally prescribed in Chinese herbalism to treat hyperthyroidism, nephritis and diabetes. The tuber is anthelmintic, digestive and gently tonic. It is used internally in the treatment of tiredness, weight loss, poor appetite, poor digestion, chronic diarrhoea, asthma, dry coughs, frequent or uncontrollable urination, diabetes and emotional instability. It is applied externally to ulcers, boils and abscesses. The tubers are harvested in the autumn and can be used raw or baked. The leaf juice is used to treat snakebites and scorpion stings. The roots of most, if not all, members of this genus, contains diosgenin. This is widely used in modern medicine in order to manufacture progesterone and other steroid drugs. These are used as contraceptives and in the treatment of various disorders of the genitary organs, as well as other diseases such as asthma and arthritis.

An easily grown plant, succeeding in a fertile well-drained soil in a sunny position or light shade, though it is best in full sun. Plants are hardy to at least -18°C (-1°F). This species of yam is much cultivated in China for its edible root that can be up to one metre long. It has a great potential to be a commercial crop in Britain, though a satisfactory method of harvesting the root needs to be found. Plants take three to four years to reach full maturity, though one year roots of well-grown plants can weigh more than 500g, with some over 4kg. There are many cultivated forms with different root shapes in China and Japan. The yam is a climbing plant that supports itself by twining around the branches of other plants. It can be grown successfully into small bushes or, perhaps simpler when being grown as a root crop, it can be grown up a frame in a similar manner to growing runner beans. The small white flowers have a pleasant scent of cinnamon. Male and female plants must be grown if seed is required. It is in flower from early autumn. The flowers are dioecious (individual flowers are either male or female, but only one sex is to be found on any one plant so both male and female plants must be grown if seed is required.

Seed is sown in spring in a sunny position (in a warm greenhouse in colder climates) and only just covered. It germinates in one to three 3 weeks at 20°C (68°F). Prick out the seedlings as soon as they are large enough to handle and grow on in a greenhouse for their first year. Plant out in late spring as the plant comes into new growth. Basal stem cuttings are taken in the summer. Division can be carried out in the dormant season, never when in growth. The plant will often produce a number of shoots, the top 5-10 cm (2-4ins) of the root below each shoot can be potted up to form a new plant whilst the lower part of the root can be eaten. Tubercles (baby tubers) are formed in the leaf axils. These are harvested in late summer and early autumn when about the size of a pea and coming away easily from the plant. They should be potted up immediately in individual pots in an unheated greenhouse or cold frame, covering them with about 10mm (0.5”) of soil. Protect them from mice etc and keep the soil moist but not wet. They should come into growth in the spring, plant them out in early summer when in active growth. 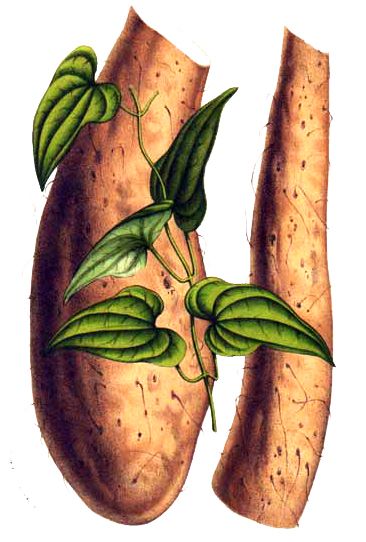 You can view the database entry here http://www.pfaf.org/user/plant.aspx?LatinName=Dioscorea+batatas