A favourite nut growing on large evergreen trees, Cashew (Anacardium occidentale), grows up to 10-12m tall with a short and usually irregularly-shaped trunk. The dwarf version growing to 6m is preferred for commercial crops. It has spreading branches and a canopy that can spread up to 12 m. The leaves are arranged in an alternate pattern, pale green in colour but shiny, with fine veins, and are relatively large but narrows towards its base. It usually takes three years after planting before it starts production, and eight years before economic yield can begin. However, there are breeds like the dwarf cashew tree that takes only a year to start production and three years to attain economic harvest. This breed grows up to 6 m tall and is known to have been more profitable, with earlier maturity and higher yields, as compared to the traditional variety. The tree is known for its seed or nut which is widely consumed raw, roasted, as an ingredient, or processed into cashew cheese or cashew butter. The cashew apple, on the other hand, is processed into a fruit drink or distilled into liquor, and used for jams and candies. Cashew nut also produces edible oil but due to the high economic value of the nut itself, the oil is not commonly extracted. The young shoots and leaves are edible as well. As a medicinal plant, the leaves are used as a treatment for reducing fever, malaria, toothache, and gum problems. The bark is used to reduce blood sugar levels and to detoxify snake bites. Cashew syrup is used as relief from coughs and colds. Cashew apple juice is believed to be an effective treatment for syphilis, cholera and kidney problems. The sap or bark extract is used as a contraceptive. Further, the gum is used to treat leprosy and fungal conditions. The tree grows well in poor sandy soil conditions. It is a tropical plant that must be grown in a frost-free environment. It is attractive to bees, butterflies and/or birds due to its fragrant flowers. It can be propagated through stem cuttings or seed sowing.

Edible portion: Nut, Leaves, Fruit pulp, Flavouring, Vegetable, Seeds, Oil. Fruit – raw or cooked. Juicy and refreshing, though they are a bit acidic and often have an astringency. They are also somewhat fibrous. They can be dried or sliced with other fruits. The fruit can also be lightly cooked to get rid of their astringency. A refreshing juice can be extracted from the fruit. Red fruits are considered to be superior to yellow fruits. The apple is used to make spirits. The fruit is about 3cm long. Seed – must be cooked before being removed from its shell. Slightly sweet with a pleasant, bland flavour. Eaten on their own, salted and used in a wide range of confections. They can also be used as the basis of savoury protein-rich meat-alternative dishes. Caution should be employed when harvesting the seed – see notes above on toxicity. An edible oil is obtained from the seed but, due to the high value of the seed, the oil is not usually extracted. Young leaves and shoots – raw in salads or cooked. Eaten in S.E. Asia, but too astringent for most tastes. They are picked during the rainy season and eaten fresh with hot and spicy dishes.

Medicinal Uses. The leaves are febrifuge. They are used in West Africa in the treatment of malaria. In India and Africa, the leaves are used to treat a toothache and gum problems. The leaves can be harvested at any time and dried for later use. The bark is astringent, rubefacient and vesicant. Research has shown that it is also hypoglycemic, having the ability to reduce blood sugar levels. The bark is used in Ayurvedic medicine to detoxify snake bites. The bark is harvested as required and used fresh or dried. Leaf and bark infusions are used in the treatment of a toothache and sore gums, while the bark and leaf extracts and fruit juice are taken internally to treat diarrhoea. The fruit is anti-scorbutic, astringent and diuretic. Cashew syrup is a good remedy for coughs and colds. Cashew apple juice is said to be effective for the treatment of syphilis and is also used in the treatment of cholera and kidney troubles. The fresh, acrid juice inside the shell is vesicant. It has been used for removing warts as well as for treating ringworm, leprosy and corns, and is applied to the soles of the feet to cure cracks in the skin. It is toxic to many disease-causing organisms, such as Staphylococcus bacteria. The sap, or bark extract, is considered to be contraceptive. The gum is bactericidal, fungicidal and kills worms and protozoa. It is applied externally in the treatment of leprosy, and for corns and fungal conditions. An infusion of the root is an excellent purgative.

Other uses rating: Medium (3/5). Backyard Tree, Courtyard, Large Planter; xerophytic. Agroforestry Uses: Because it grows well on poor sandy soils and near the coast, it has sometimes planted for erosion control. It has been intercropped with cowpea, groundnuts and horsegram in India. In Andra Pradesh and Orissa in India, casuarina and coconut constitute a popular crop combination. Plants are often used as a support for growing cultivated vanilla. Other Uses The fruits contain 45 – 47% oil which has high heat resistance. It is an excellent lubricant and is also used in varnishes, inks, termite proofing wood, insulating coatings etc. The bark contains an acrid sap of thick brown resin, which becomes black on exposure to air. This is used as indelible ink in marking and printing linens and cotton. The resin is also used as a varnish, a preservative for fishnets and a flux for solder metals. The stem yields an amber-coloured gum, which is partly soluble in water, the main portion swelling into a jellylike mass. This gum is used as an adhesive (for woodwork panels, plywood, bookbinding), partly because it has insecticidal properties. It is also used in inks, dyes and varnishes. The acrid sap of the bark contains 3-5% tannin and is employed in the tanning industry. One of the components of the bark gum acts as a vesicant and has insect repellent properties. The toxic, acrid oil in the shell has high polymerising and friction-reducing properties and is used as a waterproofing agent and preservative. It can be used for treating fishing nets, woodwork etc. to repel termites. The oil in the shell can also be added to paraffin to make it more useful in controlling mosquito larvae. It has been used in the manufacture of plastics, and in the production of certain sorts of paints such as are used for ship’s keels, cement surfaces and where corrosive influences preclude the use of ordinary paint. Distilled and polymerised, the oil is also used in insulating varnishes and the manufacture of typewriter rolls, oil- and acid-proof cement and tiles, friction-modifying material for brake linings, as a component of space-rocket lubricants, inks, etc. The reddish-brown wood is light in weight, reasonably hard, but is subject to termite attack. It is sometimes used for construction and general carpentry. It is usually of unsuitable dimensions for construction. Pulp from the wood is used to fabricate corrugated and hardboard boxes. The wood makes an excellent charcoal and fuel. The residue of the shell is often used as fuel in cashew nut shell liquid extraction plants.

A plant for lowland tropical and subtropical areas, succeeding at elevations up to 1,000 metres. Cashew grows well in hot, semi-arid, frost-free climates, fruiting well with annual precipitation of 500 – 900mm. It occurs in warm and humid climates with an annual rainfall of 1,000 – 3,500 mm. Trees prefer a pronounced dry season of 3 – 4 months. Plants are not tolerant of frost, preferring a minimum temperature no lower than 18c. Plants produce their best crops when grown not too far from the coast. Cashews can also be grown satisfactorily in semi-arid areas but can show erratic production as a result of relatively small variations in rainfall. An easily grown plant requiring very little attention once established, it succeeds in soils that are too poor to support other crops. Cashew trees prefer well-drained sandy soil and a position in full sun. The species can bear heavy, waterlogged clay soils or saline soils but with feeble growth. Brackish soils near seashores and inundated or swampy soils are not suited. Cashew tolerates a pH in the range 4.5 – 6.5. Established plants are drought resistant. Tolerant of maritime exposure. Early growth is usually rapid, with young trees sometimes flowering when only 18 months old. Although slow-growing, it can commence bearing when only 4 – 5 years old. Trees are fast growing. Trees have a productive life span of 30 – 40 years, typically beginning to bear in their third or fourth year and, under favourable conditions, attaining maximum production in around seven years. There are many named forms. The root system of a mature tree, when grown from seed, consists of a very prominent taproot and a well-developed and extensive network of lateral and sinker roots. Plant spacing should be over 40 ft. (12m).

Seed is traditionally sown in situ, germination usually taking place in 8 – 10 days. 100% germination has been reported for seed that has been stored four months in open conditions; this drops to 50% after ten months and zero after 14 months. Plants produce a long tap root and do not always transplant very well. Cuttings of ripe wood at the end of the growing season. Layering.

Cashew, Caju
Family: Anacardiaceae
USDA hardiness: 9-12
Known Hazards: The shell of the nut contains an acrid juice that acts as a potent vesicant. The active ingredient is cardole, and it is poisonous in the same way as poison ivy (Toxicodendron spp.). Very irritant to the skin, causing severe blistering. It is destroyed by heat, so roasting the seed while in its shell renders it completely safe.(Handling plant may cause skin irritation or allergic reaction ) 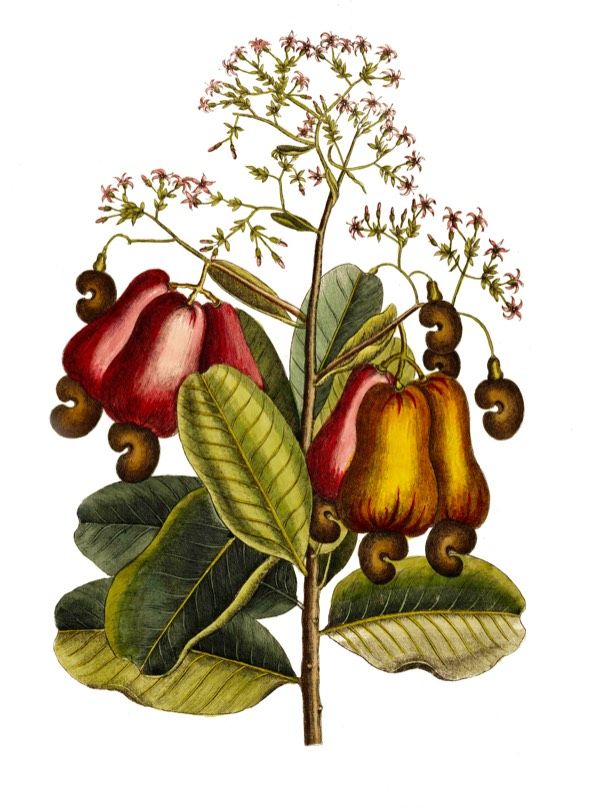 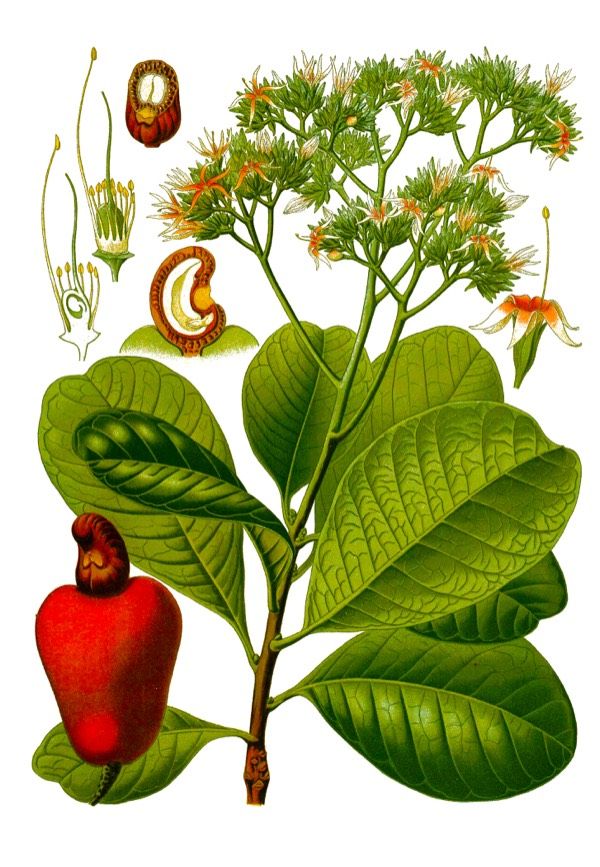 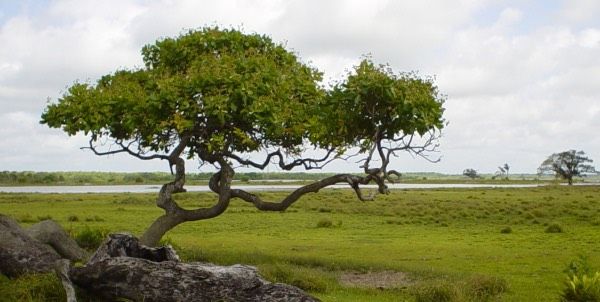 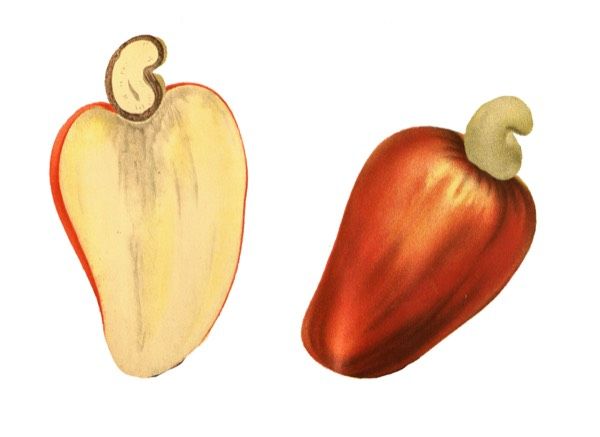