Many would agree that homegardening is going to be an important part of the solution to climate change. Eric Toensmeier has written about temperate as well as tropical homegardening traditions in China, where homegardens generate six times the income of farmland of the same size.[1] He goes on to write about the movement to develop homegardens which emerged in Australia in the 1970s, and in Western temperate and even boreal regions such as the United States, Canada, Europe, one of the driving forces behind this having been the permaculture movement. Toensmeier writes that permaculture-inspired homegardens have been successful not only in humid temperate and boreal regions but also in arid and semi-arid temperate (such as Nevada and Colorado in the United States), in Mediterranean climates, and arid tropics and subtropics (such as Jordan and Arizona).

Toensmeier sees great potential in homegardening in cold climates, but points to the lack of domestication of sufficient perennial crops besides fruits. The solution may be for homegardeners to follow the lead of Mandy Barber at Incredible Vegetables, where a wide variety of edible perennial crops are bring grown.

Plants For A Future (PFAF) arose out of research carried out by Ken and Addy Fern on their 28 acre site in Cornwall. For ten years the charity which maintains the online database has been based in Dawlish, in the home of Chris Marsh and David Gearing. We are not plants experts but over the years have grown a reasonable variety of the usual vegetables and fruit crops. But having recently visited several local projects focusing on edible perennials we decided we should get some practical experience of growing some of these more unusual crops. We decided to learn by creating a new area for edible perennials in our garden, and starting with plants and advice from Incredible Vegetables.

Our garden is on a one-in-five slope and we are ‘getting on a bit’ so we needed the area for our new bed to be terraced. More soil had to be brought in, and our first planting was of clover and phacelia seeds and potatoes, to make the soil ready for more permanent plantings next year. 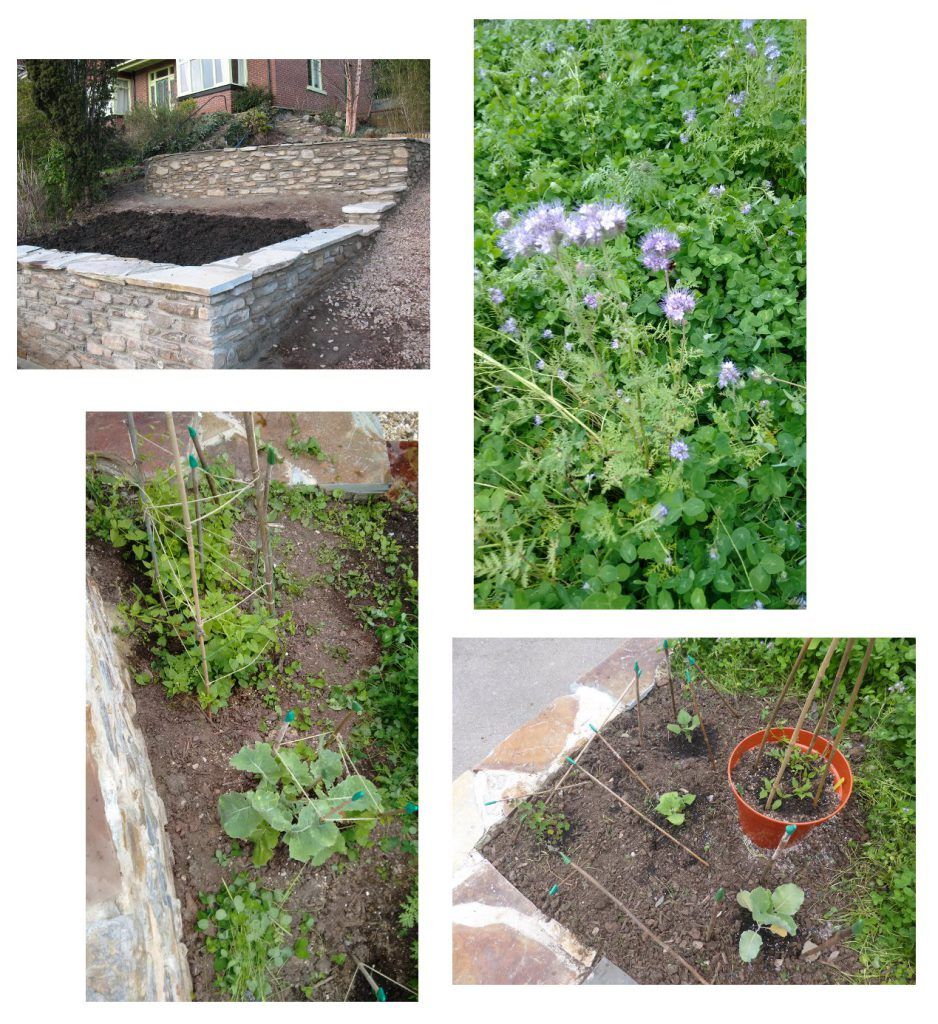 We also had four Hablitzia Tamnoides perennial spinach plants which Mandy gave us last year to start us off. They grew splendidly then, but had to be moved into pots while the new plot was terraced. This year, planted in the new bed, they struggled but are now getting going. Mandy told us that after five years Hablitzias can get to be six feet high, and then you get a big yield, with the main harvest coming in April to June, before other fresh greens are available. We also had a Daubenton’s kale plant Mandy gave us and a ‘walking onion’ we bought after her talk to Teign Estuary Transition Group in March.

We have been discussing PFAF’s forthcoming book on Edible Shrubs with Mandy, and a year on from our first visit to Incredible Vegetables we have been back. We wanted to see the site again – like Ken Fern she calls it her ‘Field’ despite it being a gorgeously diverse garden and research site. We were curious to see which plants to be featured in Edible Shrubs are on her site, and how Mandy’s research project on Nine Star Broccoli is progressing. Also Mandy had promised us some more plants for our new perennials bed. We came away with four small Apios Americana or Hopniss, Indian potato, which she advised should be planted together in a large bottomless pot in soil with plenty of grit, and a tepee of canes for the plants to climb up; a Mashua, (Tropaeolum Tuberosum), which is related to garden nasturtiums; two Yacon and a Nine Star Perennial Broccoli.

We looked again at Maddy’s plot and she also showed us round the adjacent forest garden to see plants which will feature in the forthcoming book on Edible Shrubs. (The forest garden is maintained by Ruth and Alex, other members of the group of eight friends who jointly own the 5½ acre site) 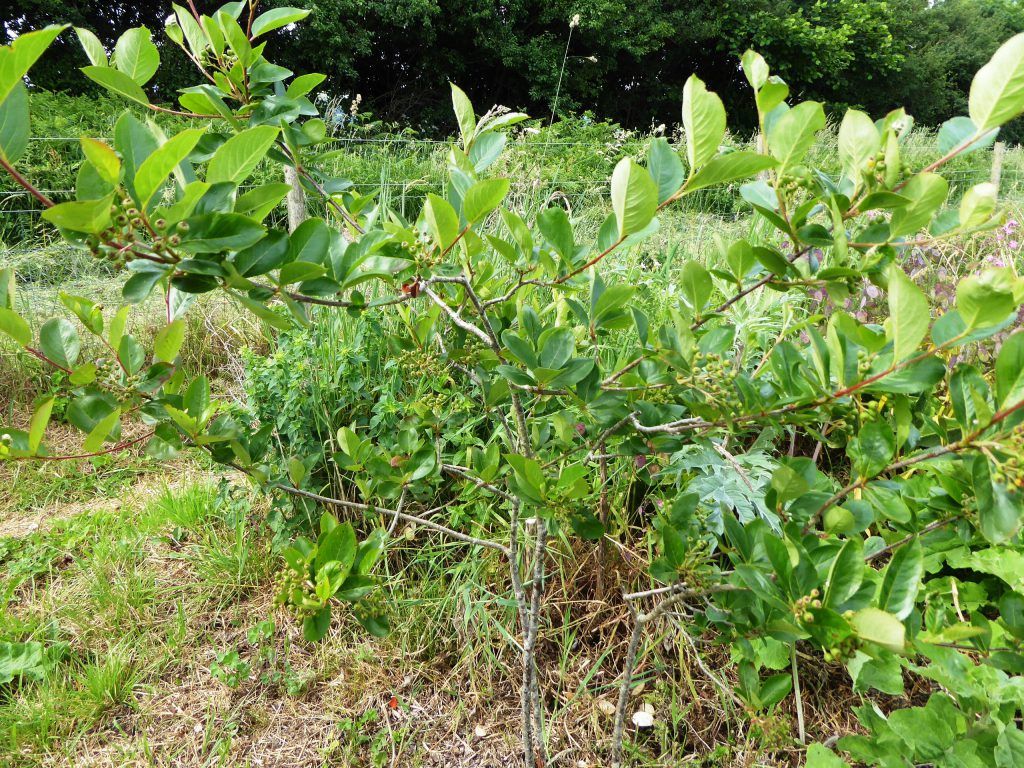 Mandy received this plant as a gift from someone who was moving from their allotment, so it’s a rescue plant she’s had for one year.

Gooseberry in the fruit cage that’s full to overflowing with soft fruit plants. 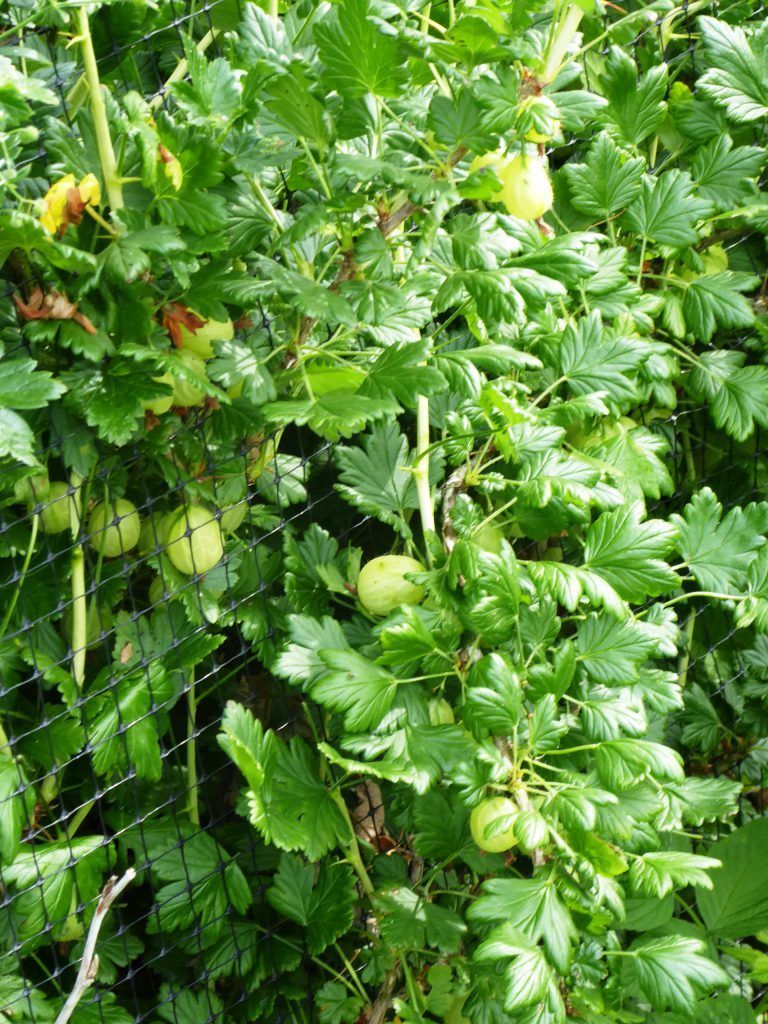 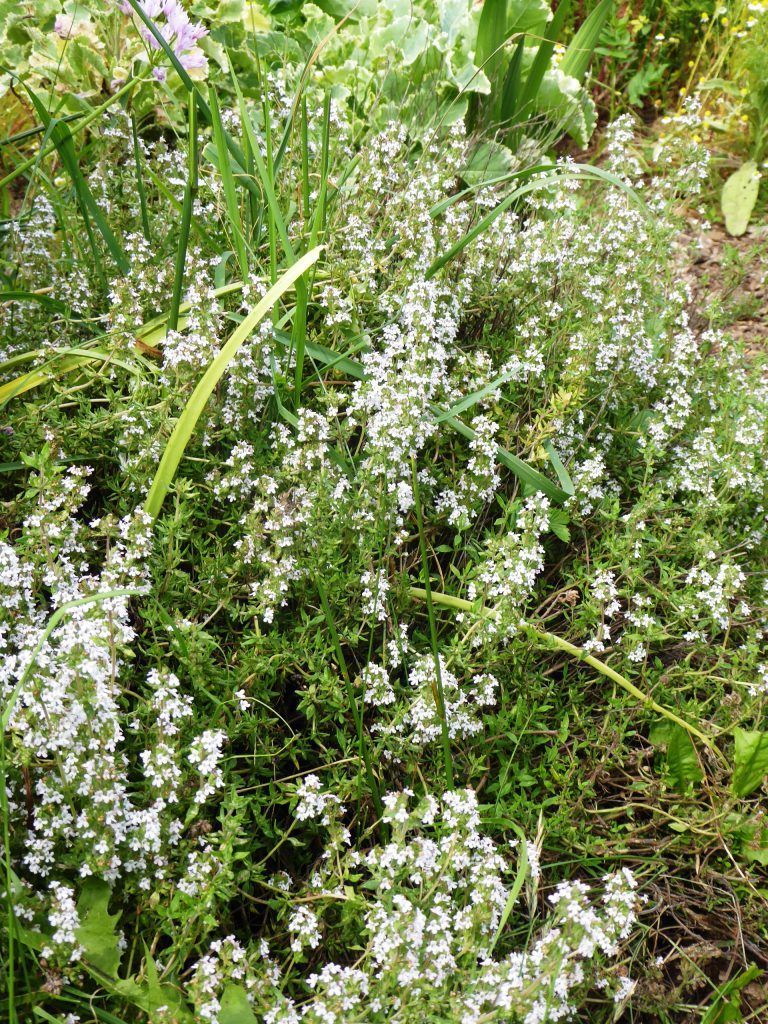 In the forest garden: 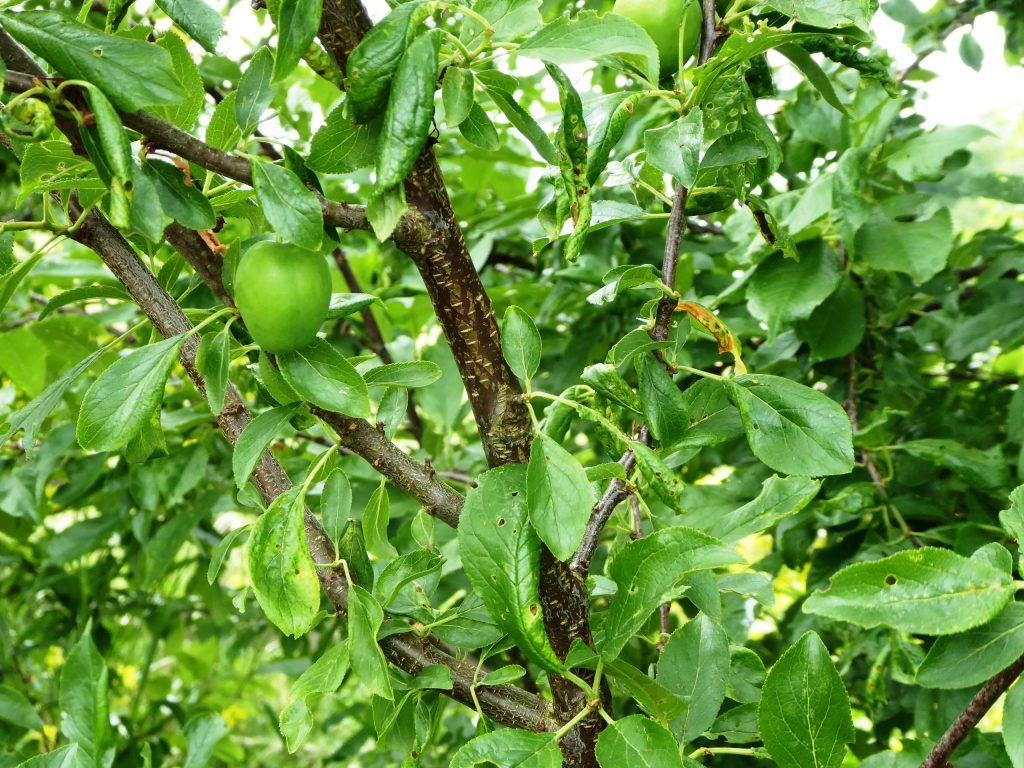 Cherry Plums were planted on one edge of the plot as windbreaks, they are six years old. They have been prolific fruiters, although we saw relatively few fruits developing this year, possibly due to the cold spring conditions. 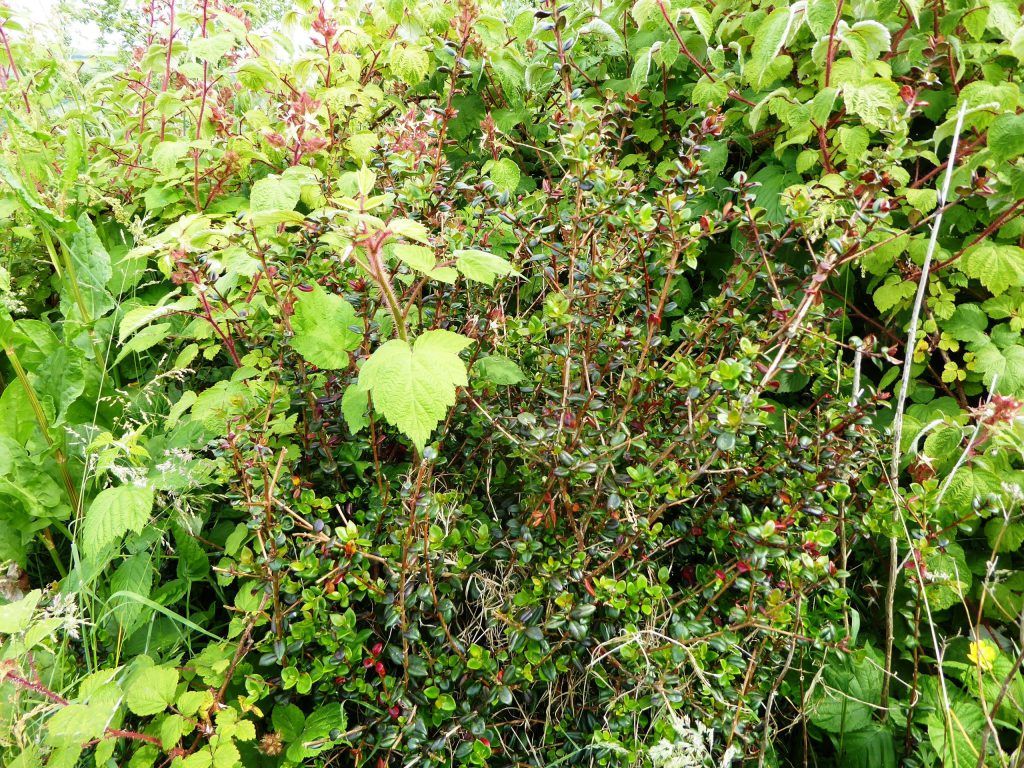 This produces fruit late in the year, which is small and sweet, tasting like bubblegum. 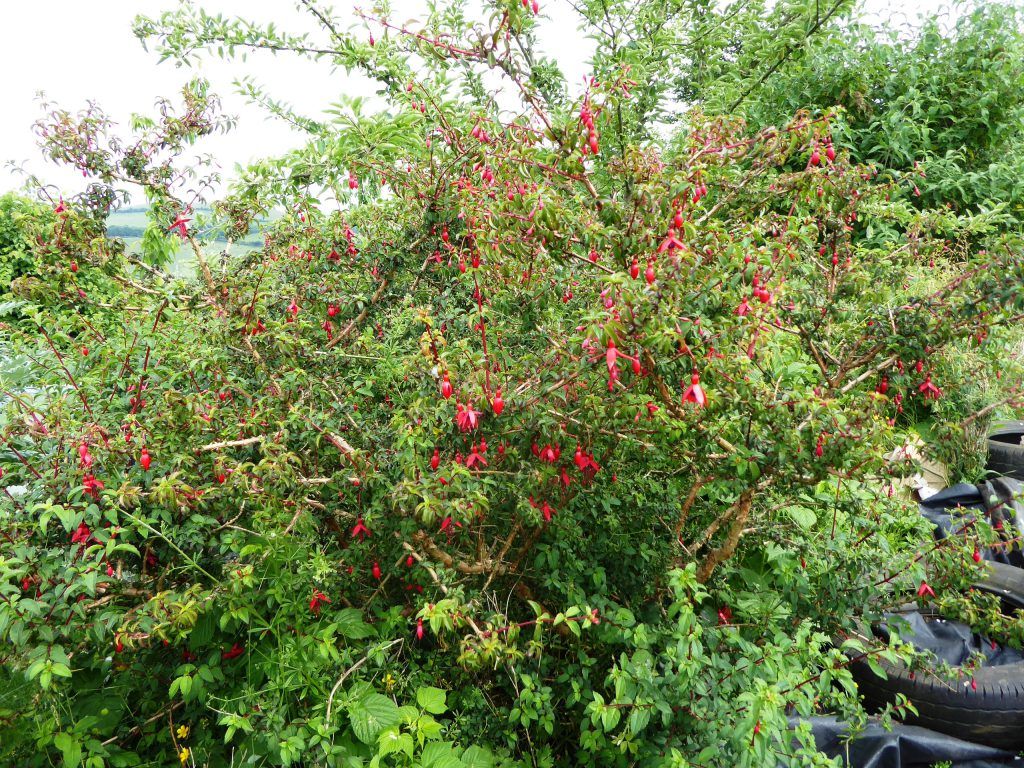 (but the variety is unknown). It has edible berries. 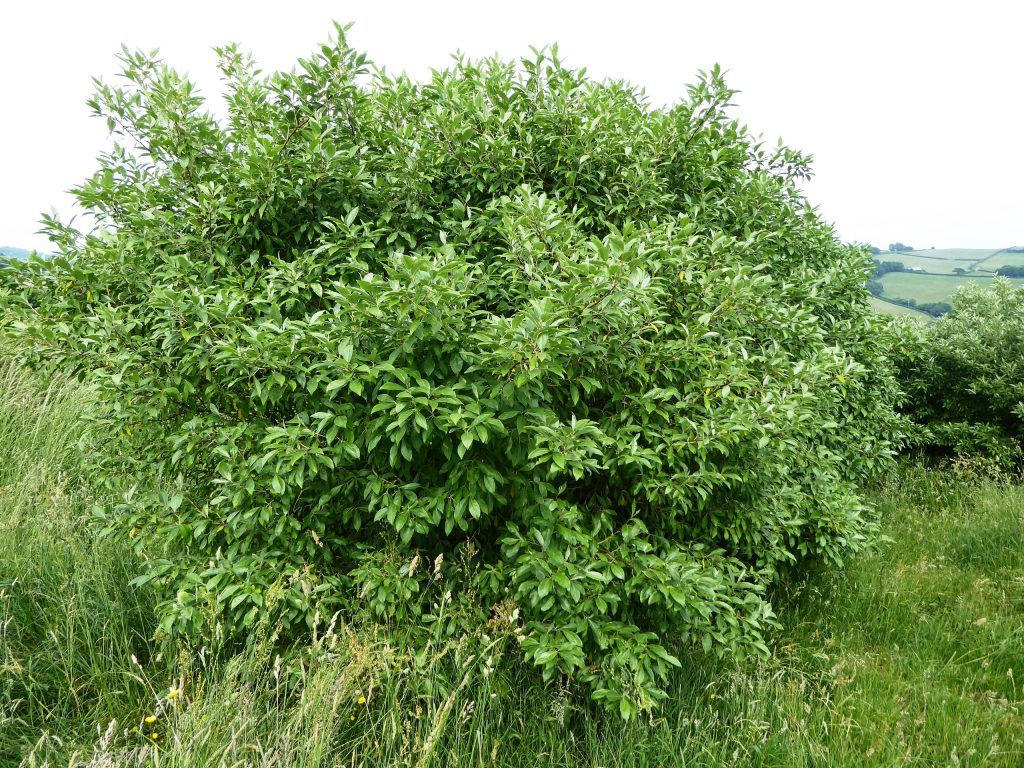 First planted 2011-12, fruits later in the year. Martin Crawford advised on what to grow here, with these as windbreak plants; they are now very dense. 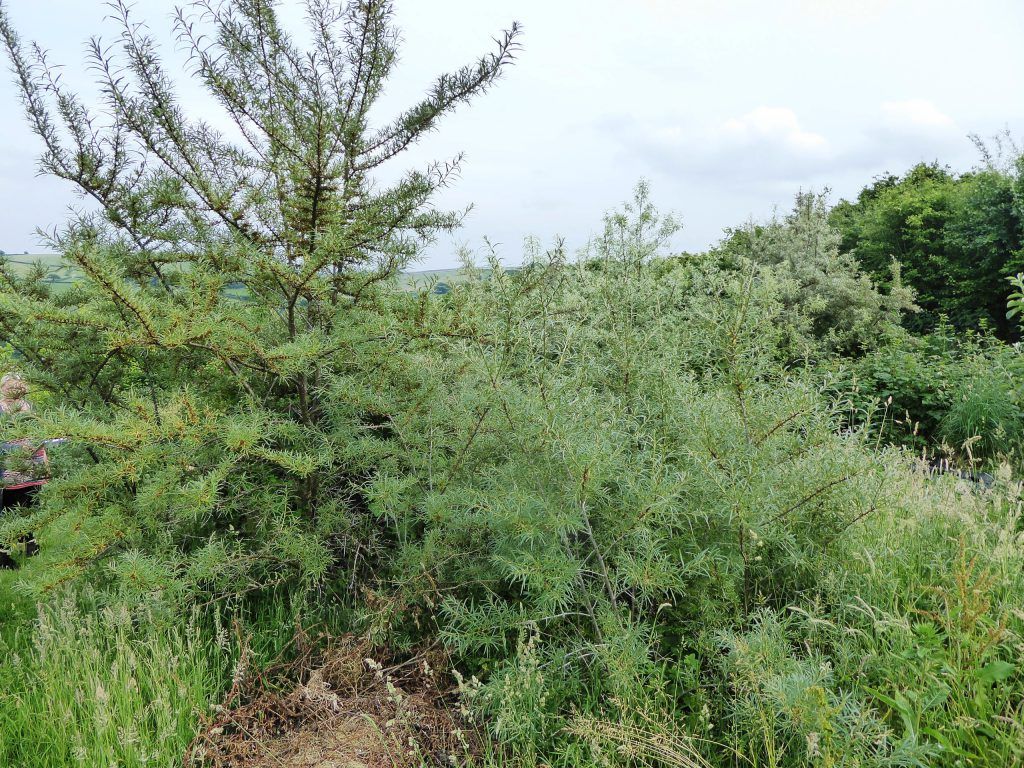 Male and female plants together. Fruit is good when made into smoothies. (Sagara from East Devon Forest Garden has huge plants.)

Ruth and Alex and friends plan to plant tree collards here in the forest garden to try a very mixed planting.

We mentioned edible shrubs mainly producing fruits, so their yields tend to be big harvests at particular times, then nothing. Mandy said fruiting can be spread by choosing species and varieties which fruit from early to late. They invite friends come to help pick for a share of the harvest. We agreed there is an issue with preserving the crop, refrigeration being a climate change and ozone layer problem (due to high energy use, and poor or absence of control of the damaging gases in refrigerants when appliances are scrapped), and jams etc. requiring lots of sugar or other sweeteners.

We were shown the extensive bed newly planted with Nine Star Broccolis, for the research project. These are protected by fine black enviromesh held up by pots on sticks, for protection against root fly and cabbage white, until end of September. 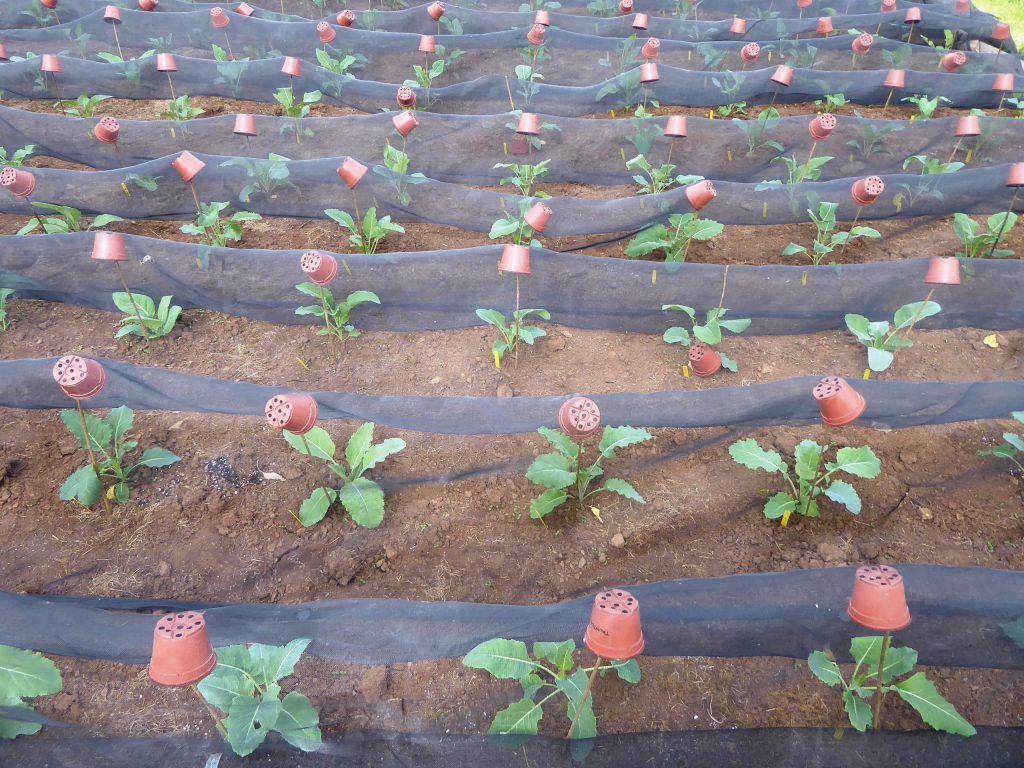 In between the plants there is crimson clover and the soil is dusted with granulated lime. The plants are individually labelled but there is also a separate plan. There are 225 plants, which is enough to form useful conclusions, although the advice is that ideally 1000s are needed for research. There are 12 types/sources, 20 of each type.

Other plants we saw in Mandy’s garden: 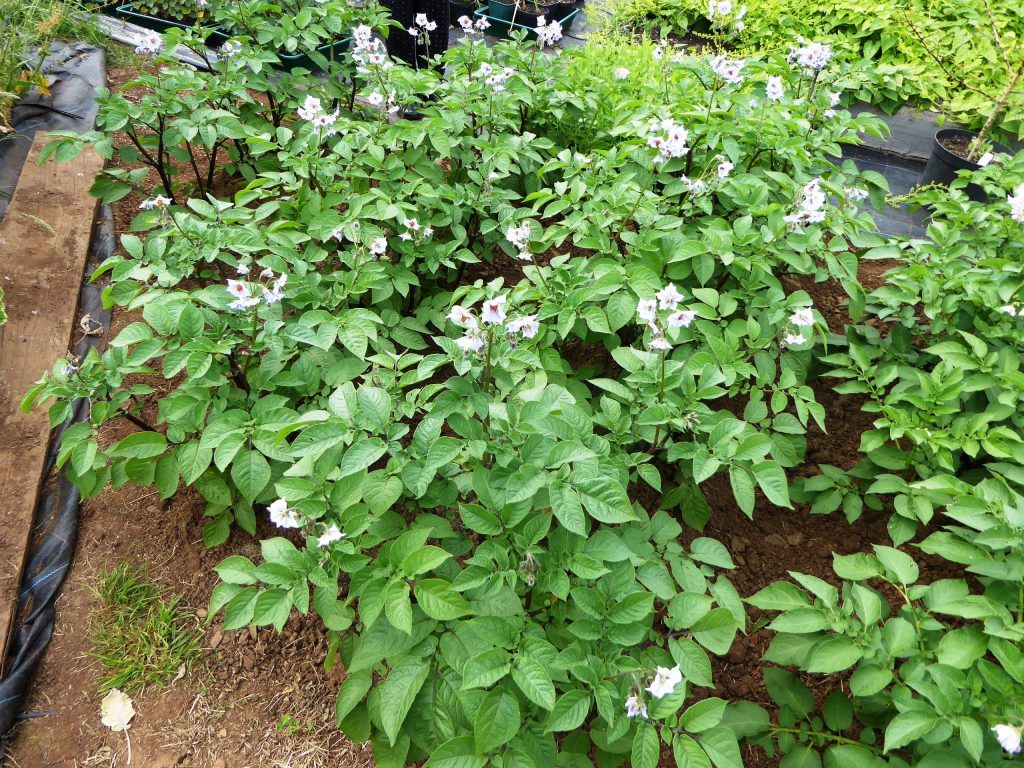 There was a bed newly planted with various squashes 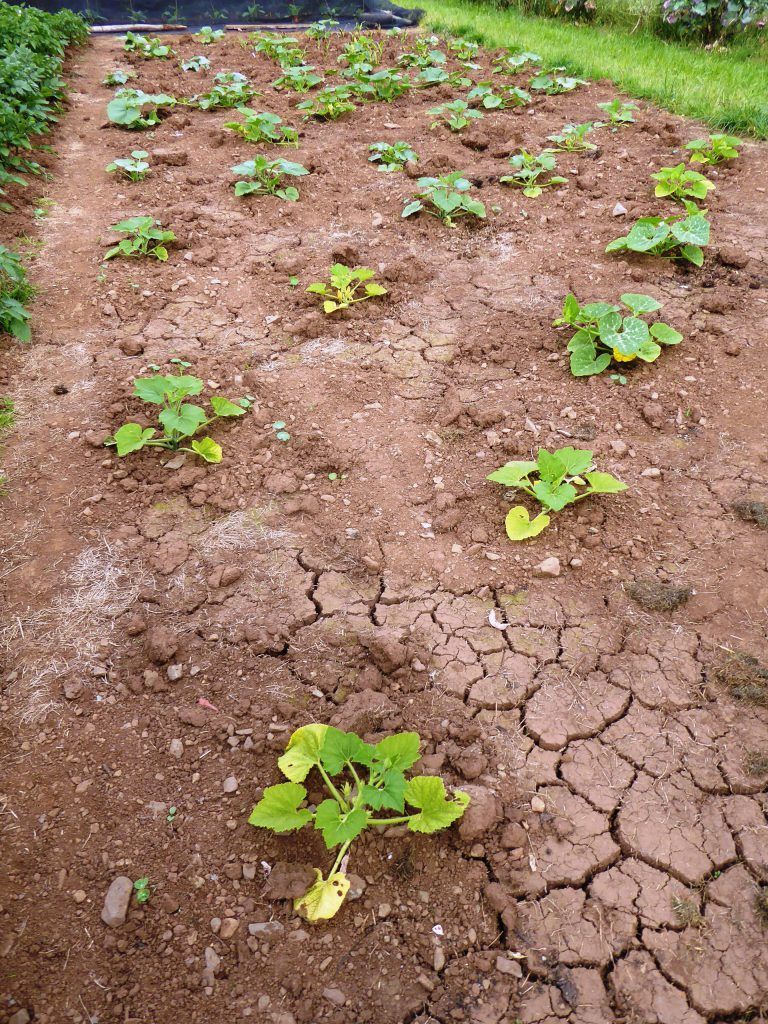 interspersed with nasturtiums to attract pollinators, and help cover bare earth instead of planting into fabric. (The local cafés like edible flowers, borage, calendula, violas and nasturtiums.)

Around that area were tree collards from a kale expert in Norway. They have flowered but carried on growing.

At one end of the bed there were red sweetcorn with the squashes. Mandy may add beans, perhaps mashua in between later. 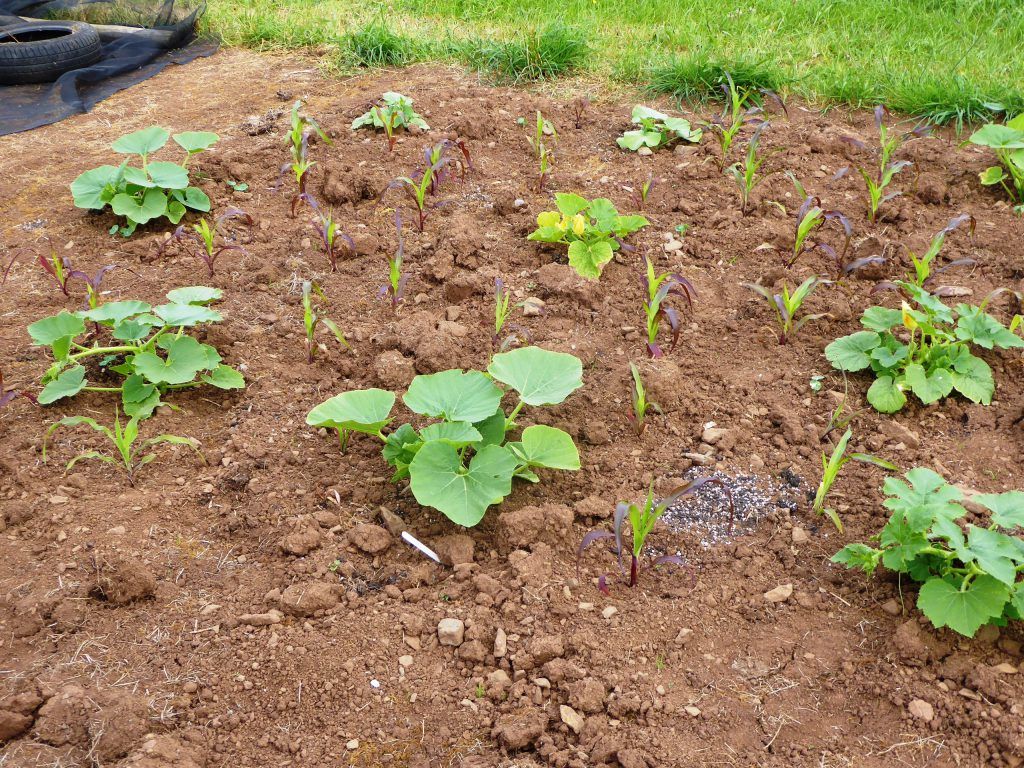 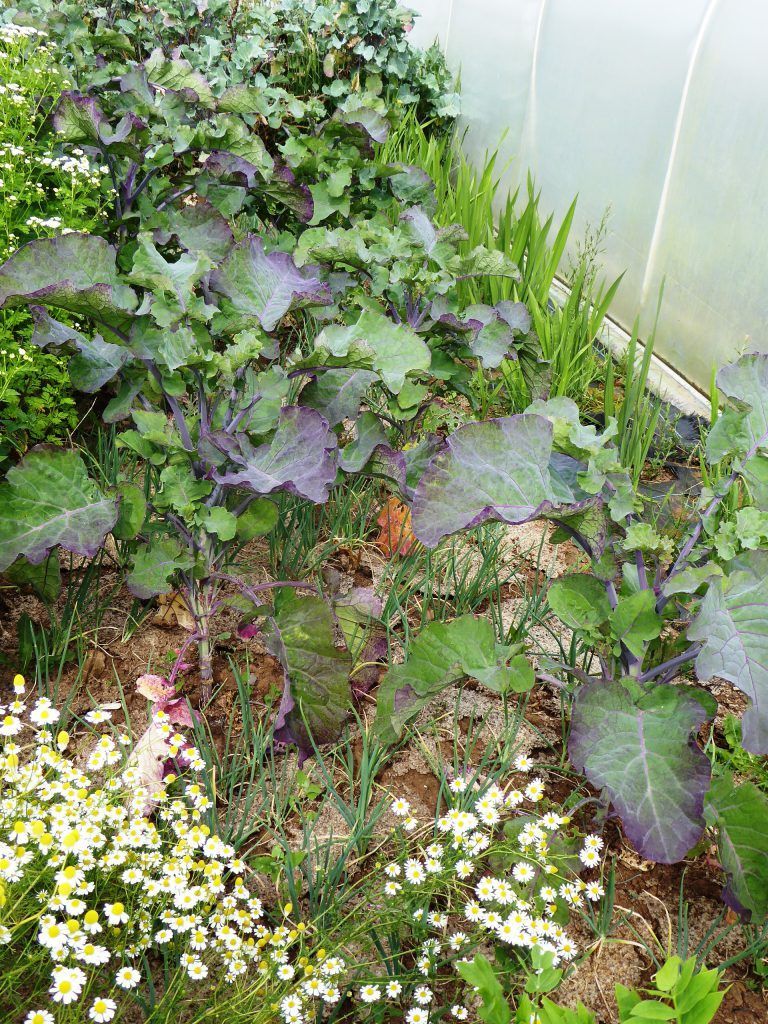 Tigrilia, which has edible flowers and tubers. 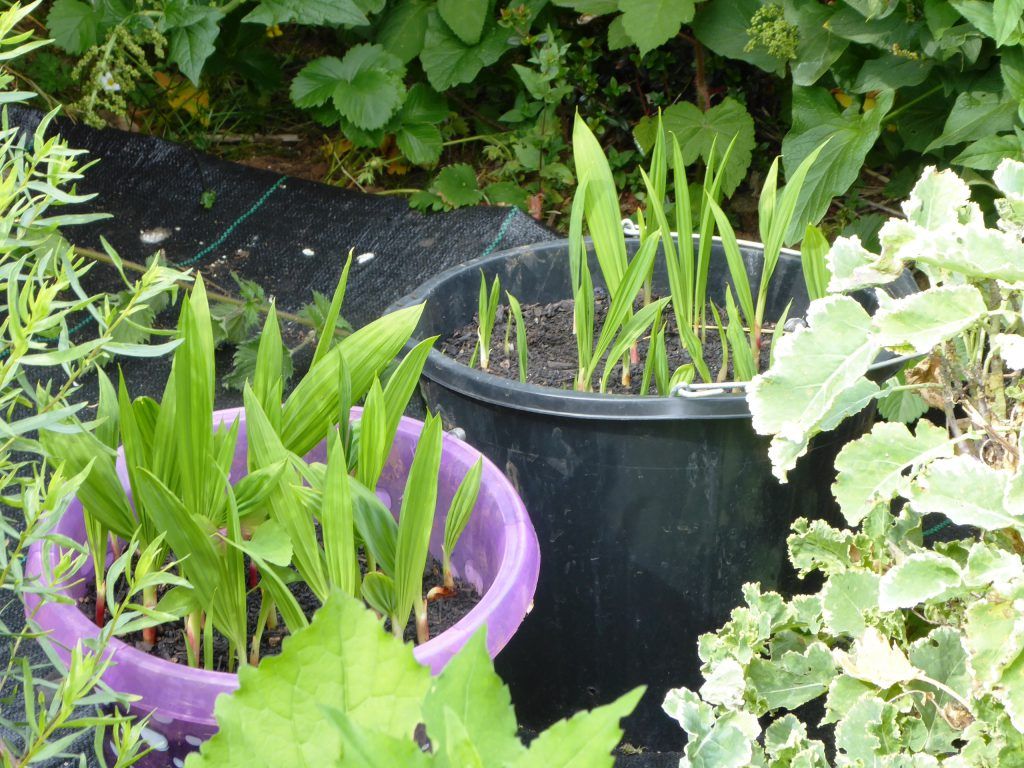 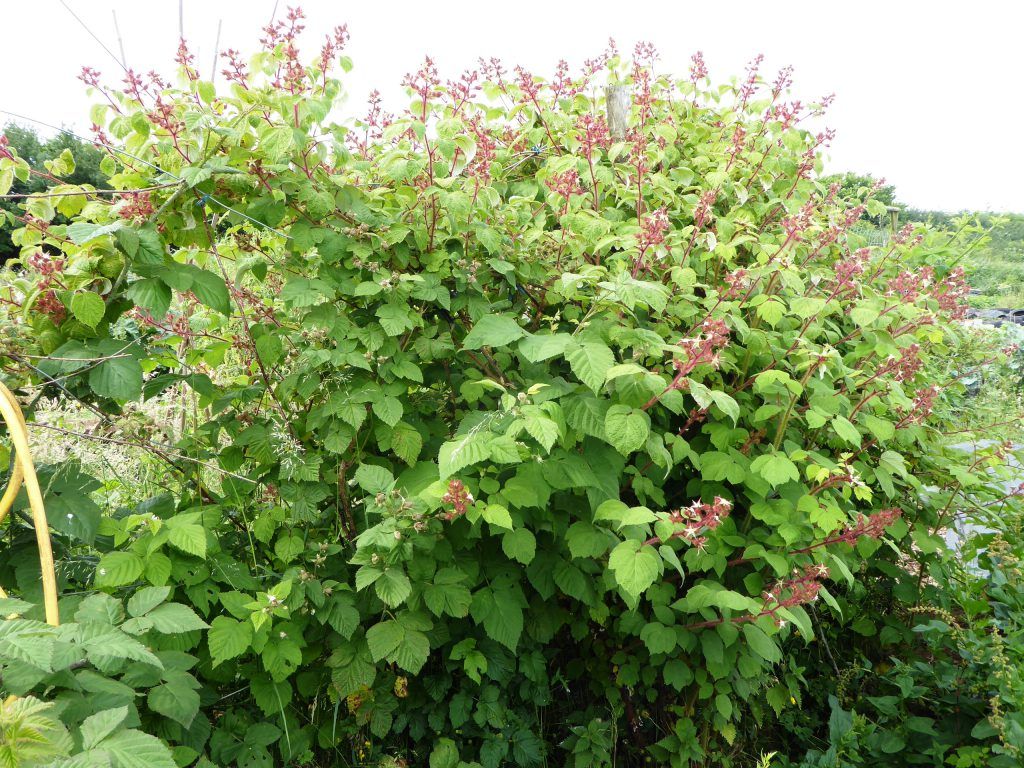 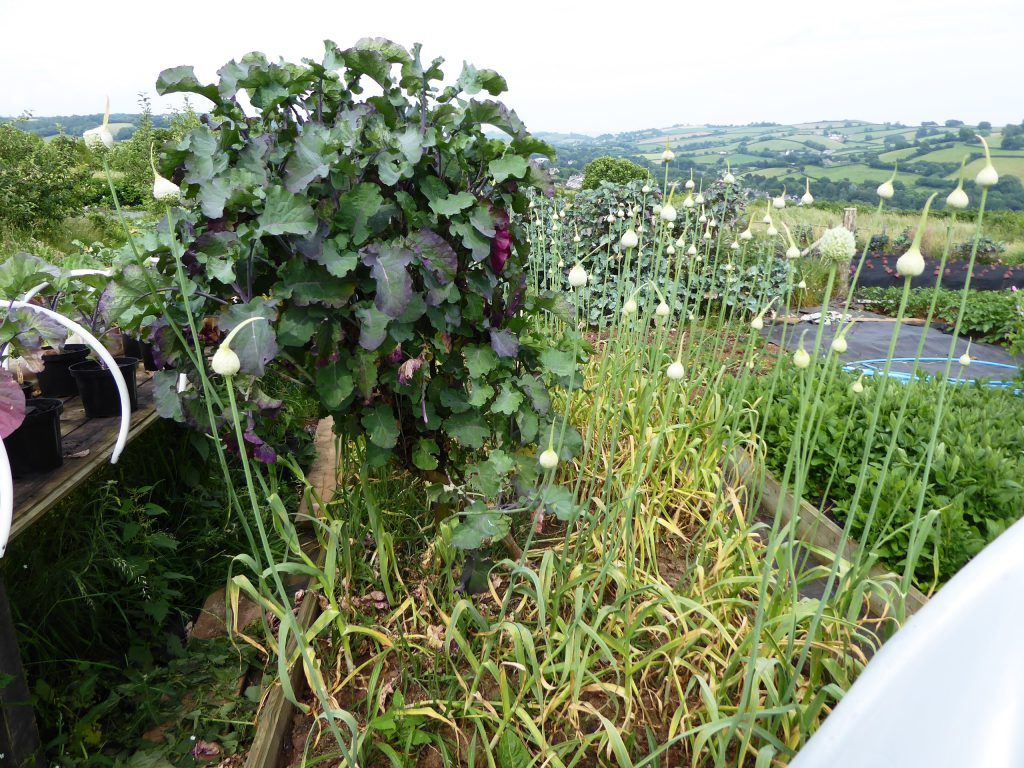 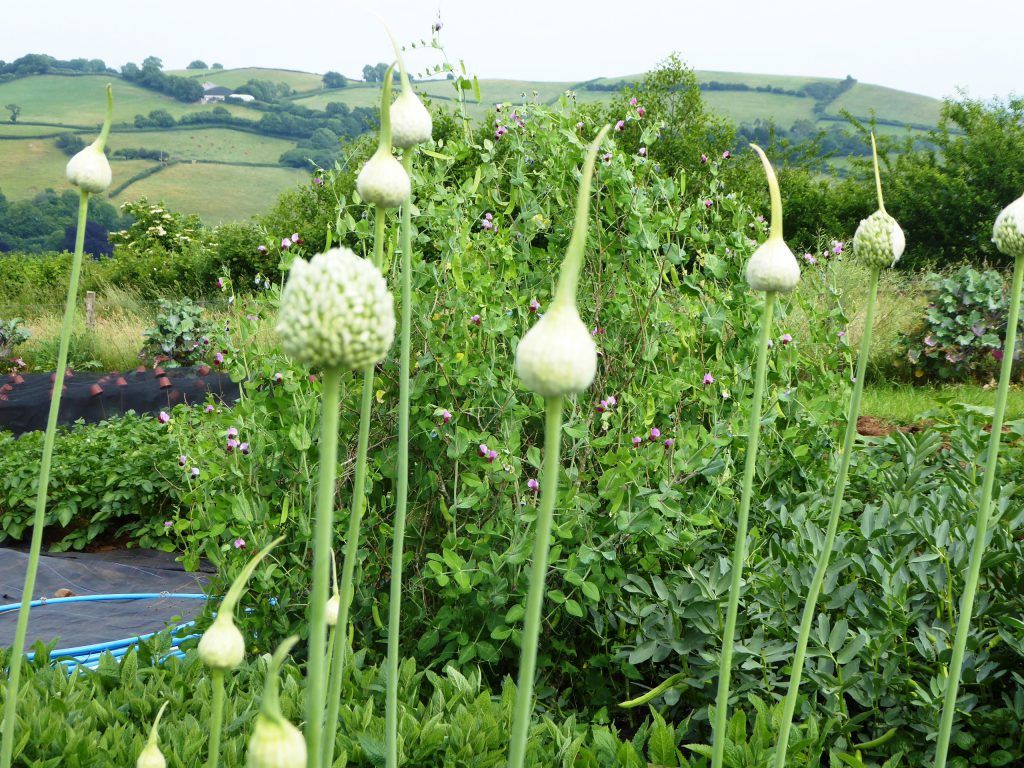 Back home we prepared a section of our new bed to receive the plants we were given.

We cleared an area cutting down the clover and phacelia, which had grown very thickly. When the new terraced beds were created last winter the soil level needed to be raised. The imported material provided by the landscapers was newly created compost from a council-run facility, rather than regular topsoil. They mixed the new material with the existing soil by rotavating. At the time we thought this would produce a good result, but we have found that it is remained claggy and hard to plant into without a lot of manual preparation.

Anyway, as soon as the preparation was finished we planting the new arrivals, adding a light compost mix into the immediate growing area. The four Apios Americana needed special treatment. We cut the bottom out of a large plastic pot and set it in the ground, filled it short of the brim with compost including grit, then planted all four plants and put a pyramid of canes for them to grow up. 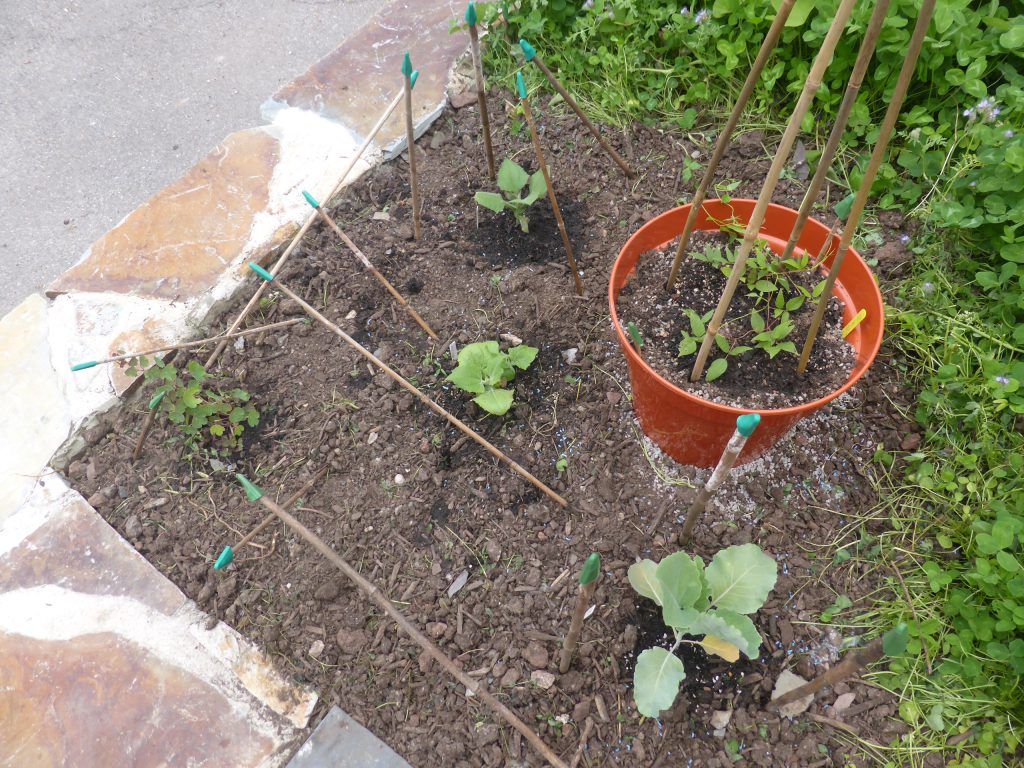