Biomass in gigatons of carbon (GtC) is a measure of abundance in the biosphere. Perhaps it is no surprise that the most abundant taxonomic group is plants at 450 GtC, but I was surprised to learn that all animals (arthropods, chordates etc.) weigh in at only 2 GtC. I was also very surprised that animals are vastly outweighed by bacteria at 70 GtC and by fungi at 12 GtC. I discovered these impressive numbers only recently in the report of the census of the biomass of all kingdoms of life published online in June 2018 (www.pnas.org/cgi/doi/10.1073/pnas.1711842115). Before that I had read – and often cited – a subset of the PNAS report which provides the extraordinary fact that, of the weight of all mammals on the planet (0.167 GtC), our livestock make up 96%, with wild mammals making only 4%. A similar measure applies to domesticated fowl and wild birds. To my mind it follows that we need to eliminate those cows, sheep, pigs and chickens, and the food industries exploiting them, in order to free the land which was cleared and degraded to provide livestock with food, so that forests and wild nature can return and the living planet’s healing begin. Hence the current advice that people need to adopt a plant-based or vegan diet in response to the climate and ecological crisis. But it may be more helpful – and less preachy – to consider the bigger numbers.

The paper I cited provides a diagram to illustrate the biomass distribution:

It also provides the following table: 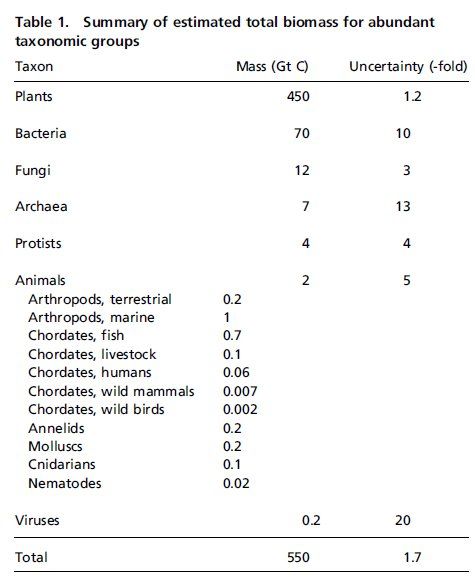 The report authors comment that the huge figure of 450 GtC for plants is largely due to the contribution of trees. And given the units being weight of carbon, plants and especially trees hold and sequester the most carbon. But it is important not to lose sight of the fact that weight in GtC is a measure of abundance. Clearly it is right in the present climate and ecological crisis that the world’s remaining forests should be preserved, and also that more trees should be planted – or allowed to develop as a stage of rewilding. As part of that, we should grow forests of plants capable of feeding us, and providing other needed materials, so we can release degraded agricultural land for rewilding – and this is where PFAF comes in. We are planning to carry out more visible outreach work in 2020 on how our database and search facilities can help advance carbon farming, carbon sequestration and food forests. But don’t we also need to understand what sort of change in society and its priorities such a solution requires? These abundance and biomass figures provide a valuable perspective.

When we compare the 450 GtC of plants with the weight of humans at 0.06 GtC, we must surely be astonished that such a puny species has brought about such catastrophic damage to the living planet. And it is even more astonishing that we have been present on the living planet for such a brief time, even if we assume the beginning was the evolution of our Homo ancestors at 1.7 million years ago.[1] The answer to how we did that is by domesticating fire, perhaps from the time the first hominids and humans appeared, some 3 to 5 million years ago. [2] There is an old saying saying: ‘the first Homo sapiens baby to emerge from the womb of its hominid mother had a firebrand in its hand’. The first phase of harm our species brought about was forest understory burning to encourage pioneer species such as grasses, so that wild grazing herds would be more abundant for hunting.[3] The second was forest clearance for growing grains on a large scale to supply cities.[4] The third was, of course, burning fossil fuels from the industrial revolution onwards. This has allowed us to replace human and animal muscle power with devices such as chain saws and other forestry clearing equipment, as well as introduce increasingly big and powerful agricultural machinery.

With the focus of PFAF being land use, I am not looking at how the release of carbon dioxide from burning fossil fuels has contributed to climate change, but on how powered machinery has accelerated land degradation, most seriously with deforestation – because forests really matter. Once forests are gone, loss of fertile soils follows: due to local climate change bringing floods and droughts and landslides instead of rainfall spread by cycles of transpiration over forested continents. Then intensive farming on the cleared land, even before modern scales and technologies, has brought soil erosion, salinisation, toxification, all exacerbated by lack of water due to failure of seasonal rainfall and replenishment by flooding, plus exhaustion of groundwater including irreplaceable reserves of fossil water.

I spent ten years in the 1980s and 90s researching and teaching on land degradation, and that led to my interest in permaculture and ultimately to PFAF. I always argued that it was crucial for environmentalists to focus on the already visible damaging effects of fossil fuel use on the land, rather than campaigning on the future threat of climate change, the response to which would be denial followed by the promise of technological fixes. Today, with global heating already upon us, and almost undeniable, we hear more on those technological fixes. We hear that leaving fossil fuels in the ground any time soon is impossible, but Carbon Capture and Storage (CCS) will allow business as usual to continue without contributing to climate change. Recently I was alerted to an academic paper on offshore CCS from a conference last year on ‘Greenhouse Gas Control Technologies’.[5] The idea of offshore CCS is that CO2 would be collected and piped into depleted gas fields such as the Goldeneye Field in the Central North Sea. 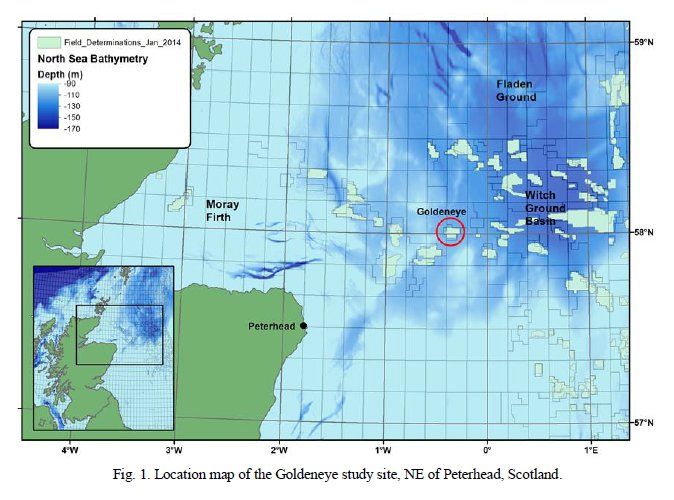 The paper is entitled ‘Establishing an effective environmental baseline for offshore CCS’, and does not cover how the piping would be carried out. The authors, who are experts from Plymouth Marine Laboratory and National Oceanography Centre, set out the financial, logistical and methodological issues involved in establishing the baselines. They show how extraordinarily challenging it would be to construct such baselines, considering the number and very large extent of proposed sites, and the variability of their geological and marine environments. One can envisage the difficulty and high cost of monitoring the CCS schemes for leakage when they are in operation, and forever afterwards once they are full of CO2. To my mind, the paper shows that CCS is no solution at all; we have to stop burning fossil fuels, in particular stop using them to destroy forests and ruin the land, and instead facilitate drawdown of CO2 by trees and other permanent vegetation.

Earlier this year I added a number of posts to the PFAF blog with the title ‘Plants to Save the Planet’. The last one was dated 19 July– quite a while ago. The reason for this gap is that I was involved in a serious road traffic accident on 22 July, and I am still recovering from that. When I sat down on 9 October to try to write something for PFAF, what was on my mind was a conversation with the manager of our local health food shop (I’ll call him ‘J’) as he was folding up smaller cardboard boxes flat to slot them into a big box for them all to go into the recycling. It occurred to me later that the suppliers of whatever had been in the boxes could have used foldable boxes – like the ones Riverford uses for its veg boxes – so they could be reused rather than be pulped at a considerable cost in energy to be made into something else – maybe more cardboard boxes. But that wasn’t what we talked about.

J asked me how I was. He knew about the accident, and that I had abdominal surgery to repair my bowel and remove my spleen. Losing my spleen means I have to take antibiotics daily for the rest of my life, and the effect of that on my gut biome had been worrying me. At a recent outpatients clinic I was reassured by the surgeon that I would just have a different collection of benign gut bacteria, ones which are resistant to the penicillin. J expressed interest as he knew of many people who had lost their spleen and had expressed similar concerns – and there are health food products like probiotics to help. J was still folding his boxes so I carried on chatting, prompted by having recently learned a surprising fact about bacteria from a study of ‘The biomass distribution on Earth’, which is that the biomass of bacteria is 70 GtC, second only to plants at 450 GtC. I moved on to talking about the statistic about domesticated livestock, the need for a switch to plant-based and vegan diets, and also brought in the idea of CO2 drawdown by remaining and new forests.

J was struck by how positive and hopeful these ideas are, compared to the gloom and doom of current campaigning. I recently sent a copy of Paul Hawken’s Drawdown to one of my daughters who is really into reducing her family’s carbon footprint, and has a hunger for numbers to guide to what to do.[6] These two examples illustrate that there is an appetite for constructive solutions, and I have high hopes we can do more through PFAF to raise interest and encourage participation.

[4] The book which first alerted me to the history of land degradation was: Vernon Gill Carter and Tom Dale, Topsoil and Civilization, revised edition (University of Oklahoma Press, 1974 [1955]).