Azadirachta indica, the Neem trees also know as Nimtree and Indian Lilac is a large deep-rooted fast growing plant with many uses including excellent medicinal properties. Neem has a rounded spreading crown and a straight trunk with thick grey bark. The 35cm long leaves are alternate with 7-17 leaflets each 6-8 cm long. When ripe the fruit is yellow to brown and about 1.5cm long. Flowers are Small and white.

Edible parts: Fruit, Leaves, Flowers, Sap. Young bitter leaves of Neem are cooked and eaten in India. They are eaten raw or fried along with other vegetables. Flowers are used for flavour; they are bitter unless cooked. Fully ripe fruit pulp is eaten raw or cooked and used for drinks. Refined oil from the seeds can be used for cooking. An fermented alcoholic drink is made from the sap of the branches. The fruits are eaten fresh or cooked, or prepared as a dessert or lemonade-type drink. They are often eaten as a pre-meal appetizer. Famine food. Leaves are sold in local markets. Leaves contain 15 % protein.

Neem is considered to be a pharmacy in its own right in India, where every part of the plant is used medicinally. It contains a number of medically active substances including meliacins, triterpenoid bitters, tannins and flavonoids . It is one of the most important detoxicants in Ayurvedic medicine and a potent febrifuge. It is a bitter, tonic herb that acts as an alterative, clearing toxins, reducing inflammation, lowering fevers, promoting healing and generally improving bodily functions. It destroys a wide range of parasitic organisms and is spermicidal. It is not usually given to the very young, the old or the weak. Leaf teas are traditionally used to treat malaria, peptic ulcers and intestinal worms. The leaf juice is applied externally to ulcers, wounds, boils and eczema. An oil extracted from the seed is strongly antifungal, anthelmintic, antiseptic and purgative. It is applied externally in cases of leprosy and is also used as a vehicle for applying other active ingredients to the body . People use the twigs as toothbrushes, where they help to firm up the gums and prevent gum disease. Dentists find them effective in preventing periodontal disease. The bark is bitter and astringent. A decoction is applied externally to haemorrhoids. Neem oil is a powerful spermicide and can therefore be used as an inexpensive birth control method . Neem oil has been used traditionally as a topical treatment for skin symptoms in both humans and livestock, but it should not be ingested orally. Neem has proved effective against certain fungi that infect humans. In a laboratory study, neem preparations showed toxicity to cultures of 14 common fungi. The tree has suppressed several species of pathogenic bacteria, including Salmonella typhosa and Staphylococus aureus . Various parts of A. indica have anthelmintic, antiperiodic, antiseptic, diuretic and purgative actions, and are also used to treat boils, pimples, eye diseases, hepatitis, leprosy, rheumatism, scrofula, ringworm and ulcers.

Other Uses of Neem

Agroforestry Uses: Being drought resistant with a well-developed root system capable of extracting nutrient from the lower soil levels, it is a suitable tree for dune-fixation. The large crown makes it an effective shade tree, planted widely as an avenue tree in towns and villages and along roads in many tropical countries. Because of its low branching, it is a valuable asset for use as a windbreak. Intercropping A. Indica with pearl millet, Pennisetum glaucum, has given good results in India. Farmers in India use neem cake (the residue left after extracting oil from the seeds) as an organic manure and soil amendment. It is believed to enhance the efficiency of nitrogen fertilizers by reducing the rate of nitrification and inhibiting soil pests including nematodes, fungi, and insects. The leaves and small twigs are used as mulch and green manure. The dried leaves are insect repellent; they are used like mothballs in linen cupboards and also placed within books in libraries. The neem tree is a potent insect repellent. The principal active compound is called azadirachtin. Extracts can be made from leaves and other tissues, but the seeds contain the highest concentrations of the compound. It acts as an insect repellent, inhibiting feeding, and disrupting insect growth, metamorphosis and reproduction. Formulations based on neem do not usually kill insects directly but alter their behaviour in significant ways to reduce pest damage to crops, and reduce their reproductive potential. Azadirachtin affects insect physiology by mimicking a natural hormone. It has been shown to affect egg production and hatching rates. Azadirachtin can inhibit moulting, preventing larvae from developing into pupae. Many foliage-feeding species avoid plants treated with neem compounds or cease eating after ingesting the neem. Its has proven effective as an antifeedant on about 100 insect species. Thus the extracts work especially well to protect plants from defoliation without affecting beneficial pollinating insects like honeybees. A traditional agricultural practice involves the production of neem tea. The seeds are dried, crushed and soaked in water overnight to produce a liquid pesticide that can be applied directly to crops. Crushed seed kernels are also used as a dry pesticide application, especially to control stem borers on young plants. These homemade remedies are often very effective in repelling pests or acting on insects as a feeding deterrent. The strength of homemade preparations can vary due to the concentration of azadirachtin and other compounds in the seed, which can in turn depends on the genetic source of the seeds. It can also be affected by the process of handling and drying the seeds, contaminants in the water, and exposure to high temperatures or sunlight. The active compounds break down quickly, so an application of neem tea generally provides protection for only about 1 week. A non-drying oil extracted from the seed, called margosa oil, has insecticidal properties. It is also used in hair dressings. The oil can also be used as a fuel in lamps. The oil has long been produced in Asia on an industrial scale for soaps, cosmetics, pharmaceuticals and other non-edible products. The seed oil yield is sometimes as high as 50% of the weight of the kernel. A resin, obtained from the trunk by wounding the bark, is added to soap, toothpaste and skin lotions. This high-protein material has potential as a food additive and is widely used in Southeast Asia as ‘neem glue’. People use the twigs as toothbrushes, and dentists find twigs effective in preventing periodontal disease The tree bark contains 12-14% tannins. This compares favourably with conventional tannin chemicals. Wood – the grain is rough and does not polish well. It is highly prized for its insecticidal properties. The wood is used to make wardrobes, bookcases and closets, as well as packing cases because of its insect repellent quality. The wood is so highly valued as an insecticide that in some areas of Africa the tree is grown in hedges in order to provide easily obtained supplies of the wood. The main stem of the tree is also widely used to make posts for construction or fencing because the wood is termite resistant. Charcoal made from the wood is of excellent quality and the wood has long been used as firewood.

Neem is a very tough tree and is said to grow almost anywhere in the lowland tropics and subtropics. It is cultivated at elevations up to 1,500 metres, but grows best when below 700 – 800 metres. It grows best in areas where annual daytime temperatures are within the range 26 – 40c, but can tolerate 14 – 46c. Mature plants tolerate some frost, but seedlings are more sensitive. It prefers a mean annual rainfall in the range 450 – 1,200mm, but tolerates 200 – 2,000mm. Prefers a well-drained soil in a sunny position. Tolerates poor soils and is drought tolerant once established. The plant quickly dies in waterlogged soils, and does not succeed in deep dry sands where the dry-season water table lies below 18 metres. Tolerant of moderate soil salinity. Plants can tolerate fairly heavy shade during their first few years, though then require large amounts of light. Prefers a pH in the range 5.5 – 7, tolerating 5 – 7.5. The plant needs some control, for it may aggressively invade neighbouring areas and become a weed. A fast-growing tree, it can reach a height of 4 – 7 metres after 3 years, and 5 – 11 metres after 8 years. Trees may start flowering and fruiting at the age of 4 – 5 years, but economic quantities of seed are produced only after 10 – 12 years. Trees coppice freely, and early growth from coppice is faster than growth from seedlings. The plant also withstands pollarding well. Zimbabwe. Tree produces 20 kg of fruit.

Seed is best sown as soon as it is ripe, it does not require pre-treatment, though depulping and cleaning of seeds considerably improves the germination rate. The seed can be sown in a nursery seedbed, direct in situ or in containers, covering the seed with about 1cm of compost. Mature seeds germinate within a week, with a germination percentage of 75 – 90%. Seedlings can be potted up when they are about 5cm tall. Air-layering. Root cuttings. Seeds planted in nurseries need to have roots pruned off regularly. Seedlings can be planted out after 14-18 weeks. A spacing of 5 x 10 m is suitable. Fruit fall naturally during the rainy season.

Azadirachta indica – A.Juss Neem
Size: Tree growing to 15 m (49ft) by 15 m (49ft) at a fast rate.
Family: Meliaceae
USDA hardiness: 10-12
Known Hazards: Neem extracts may have toxic effects on fish and other aquatic wildlife and on some beneficial insects. Therefore, care should be taken that any unused extracts are disposed of by exposing them to heat or sunlight to break down the active compounds. Alkaloids in the fruit and bark contain alkaloids that may cause vomiting.
Habitats: Mixed forests. Evergreen lowland forests.
Soil: Suitable for medium (loamy) and heavy (clay) soils, prefers well-drained soil and can grow in nutritionally poor soil.
Suitable pH: acid and neutral soils and can grow in very acid soils.
Light: Semi-shade (light woodland) or full sun.
Moisture: It prefers dry or moist soil and can tolerate drought.
It can tolerate atmospheric pollution.
Edibility Rating: 2
Other Uses Rating: 5
Medicinal Rating: 4 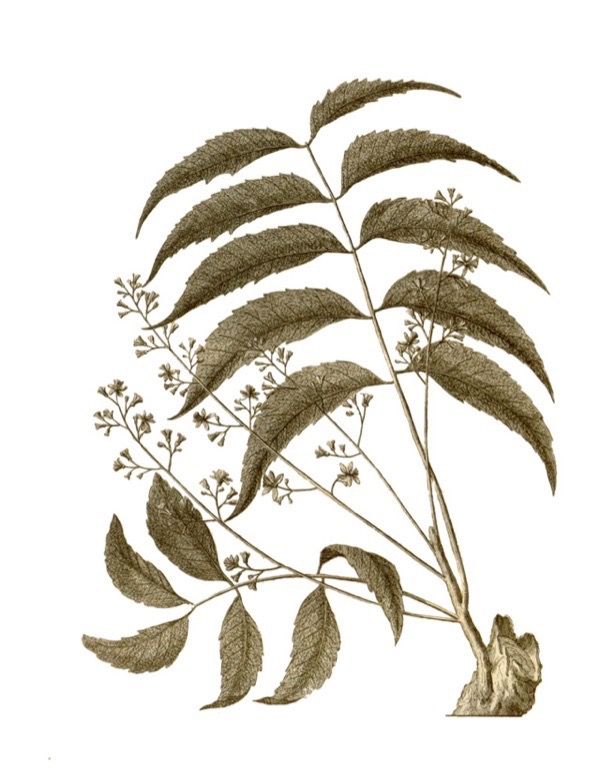 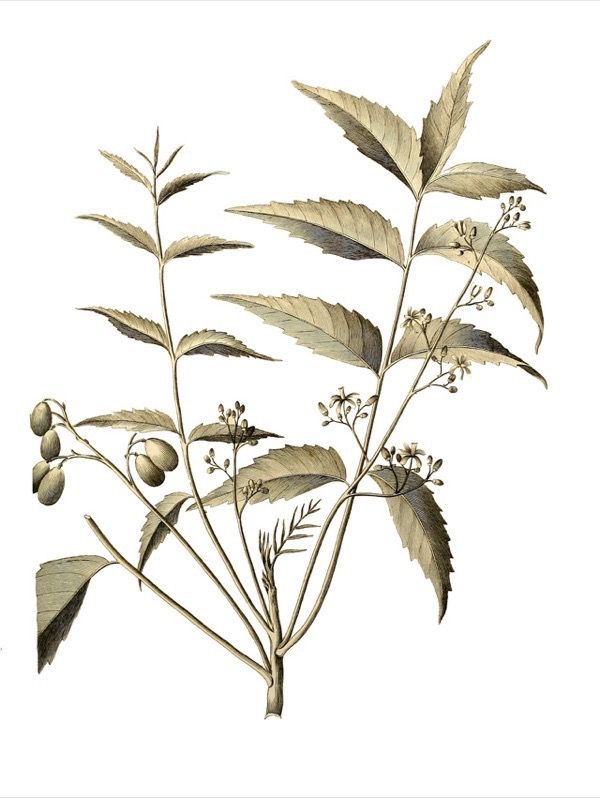 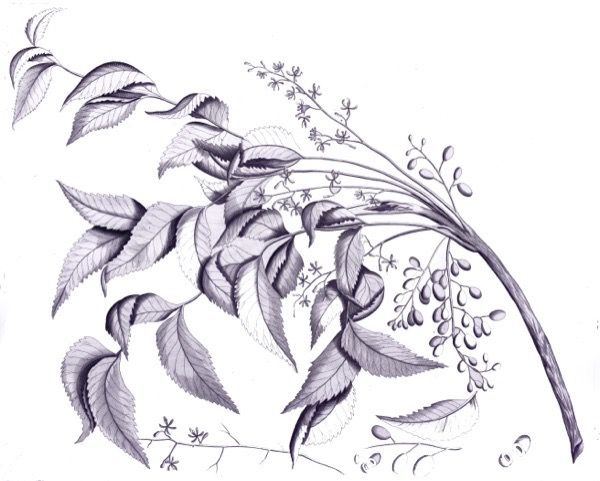 The edible, medicinal and other uses of Sweet Almond Prunus dulcis