Adansonia digitata are large deciduous trees with a large thick trunk (possibly the thickest in the world) that is thick-boled (bottle-shaped) reaching a diameter of 10-14 m (33-46 ft). The common name baobab is derived from Arabic meaning “father of many seeds?. Usually solitary individuals surviving well in dry climates and tolerating fire. They can reveal the presence of a watercourse from a distance. It is a very important plant with edible, medicinal and other excellent uses. Growth rate will be determined by ground water or rainfall. Possible maximum age suggested is 1,500 years old. All baobab trees are deciduous, losing their leaves in the dry season, and remains leafless for nine months of the year. Baobabs flowers in mid winter with large, pendulous, heavy white flowers with a very large number of purple stamens. The indehiscent fruit are large, egg-shaped capsules filled with pulp that dries, hardens, and falls to pieces which look like chunks of powdery, dry bread.

Edible portion: Roots, Leaves, Fruit, Seeds, Bark, Sprouts, Flowers, Vegetable. The acid pulp of the fruit is eaten and made into drinks. An edible white, powdery, dry pulp found in the fully ripe fruit is very rich in vitamin C and B2 and makes a refreshing drink. The drink is said to taste like lemonade. Ripe fruits are collected and cracked to remove the ‘flour’, which is mixed with milk to prepare a flavoured fermented porridge. The pendant fruits are velvet-covered, gray and gourd-like, about 30cm long, and apparently look like dead rats hanging from the tree by their tails. The acid pith of the fruit is used as a substitute for cream of tartar in baking. It is also roasted and used as a coffee substitute. Young leaves – cooked. A tasty spinach. Eaten as a potherb or dried, ground into a powder and used to thicken soups, stews etc. Rich in Vitamin C, they also contain uronic acids – they are in high demand in West Africa as a soup vegetable. An extract of the leaves, called ‘lalo’, is used to give couscous a smooth consistency. The leaves also form an excellent condiment and seasoning. Seed – eaten mixed with millet meal. Ground into a flour, they are used as a flavouring or baking powder substitute. When slightly fermented, this powder has the flavour of almonds. The roasted seed is a coffee substitute. The seeds contain appreciable quantities of tartaric acid and potassium bitar; they are refreshing to suck, and when soaked in water make a palatable drink. An edible oil can be obtained from the seed. A pleasant flavour. Flowers – raw. Tender roots are eaten. Mature, thick roots are cooked and eaten during times of famine. A root decoction is widely used in Sierra Leone as food. It is prepared by boiling, roasting, soaking or fermenting the roots, and tastes like almonds. The shoots of germinating seeds are edible. Eaten as a vegetable. A delicious flavour. Having a high water content, the wood is chewed by humans and animals in cases of extreme water scarcity. The wood can be used as a salt substitute.

The leaves are hyposensitive and antihistamine. They are used to treat kidney and bladder diseases, asthma, general fatigue, diarrhoea, insect bites, and guinea worm. Leaf and flower infusions are valued for respiratory problems, digestive disorders and eye inflammation. Seeds are used to cure gastric, kidney and joint diseases. They are roasted then ground and the powder smeared on the affected part or drunk in water. The seed paste is used for curing tooth and gum diseases. The fruit pulp, seed and bark are reputedly an antidote to Strophanthus poisoning. The pulp is widely used in Africa as a diaphoretic to combat fevers, and to treat dysentery. The gum from the bark is used for cleansing sores. It is also used as an expectorant and a diaphoretic. The bark is used in steam baths for calming shivering and high fever. The bark is boiled and taken as a cure for body pains. This infusion is also used to treat colds, fever and influenza A decoction of the roots is taken as a remedy for lassitude, impotence and kwashiorkor.

Agroforestry Uses: Decaying wood of a tree that has died of old age or from lightning is spread on fields as a fertilizer. Ashes from the shell, bark and seed are rich in potash and are useful as a fertilizer. Other Uses Ash from the shell, bark and seed, rich in potash, is widely used in making soap, prepared by boiling the bark and fruit ash in oil. The shell can be used as a dish, water dipper, vessel for liquids, snuffbox, fishing float etc. It also makes an excellent rat trap. The powdered husk or peduncle may be smoked as a tobacco substitute or added to snuff to increase pungency. The pulp extract can be used as a hair wash. The acid pulp is used as a coagulant for rubber. The acid pith is used to coagulate rubber. A glue can be made by mixing flower pollen with water. The wood and bark contains some tannins. The roots produce a useful red dye. A non-drying, golden yellow oil of agreeable taste can be obtained by distilling the seeds. It is used for making soap. The seed contains about 14% oil. The fruit pulp burns with an acrid, irritating smoke that can be used as a fumigant to deter insects troublesome to livestock. The bark is boiled for days to extract a substance poisonous to ants. The bark from the lower part of the stem of younger trees and of the roots can be removed to produce a valuable fibre. The fibres are long, from 90 – 120cm in length. If managed properly the trees are not seriously damaged, and even after repeated use the bark regenerates and can be stripped again some years later. It is used to make excellent cordage, ropes, harness straps, mats, snares and fishing lines, fibre cloth, musical instrument strings tethers, bed-springs and bow strings. The fibres can be woven into waterproof hats that may also serve as drinking vessels. The fibre is the best for making the famous ‘kiondo’ baskets of Kenya. Strong, tough and tear-resistant paper is produced from the fibre. It is commercially exploited in India for currency notes. The wood is whitish, spongy and light (air-dried 320 kg/cubic m). Easily attacked by fungi, it has no commercial value, but is used locally for making canoes, rafts, insulating boards, wooden platters and trays, boxes and floats for fishing nets. The long-fibred wood is suitable for firewood. The wood is unsuitable for use as a fuel. The shell and seeds are also used for fuel, which potters use to smooth earthenware necklaces before firing.

Plants succeed in the lowland drier tropics up to an elevation of 1,500 metres. They grow best in areas with a mean annual temperature in the range 20 – 30c. They prefer a mean annual rainfall of 250 – 1,000mm, but can tolerate it as low as 100mm or as high as 1,500mm. They cannot succeed in areas subject to frost, being able to tolerate no more than one day of frost each year. Requires a position in full sun in a sandy, well-drained soil. Plants do not grow in deep sandy soils, presumably because they are unable to obtain sufficient anchorage and moisture, but are commonly found in sandy soils overlying loam and with a high water table. Established plants are very drought tolerant. Prefers an acidic soil with a pH lower than 6.5. After reasonably fast growth when very young Trees grow quickly reaching 2 m in 2 years, it becomes a very slow-growing and long-lived tree, with some gnarled specimens believed to be around 2,000 years old. The thick, fibrous bark is remarkably fire resistant, and even if the interior is completely burnt out, the tree continues to live. The wood inside the bark is unusually soft – hollowed out trees have been used as bars, shops and even prisons. Plants are resistant to termites. The baobab is a popular species for bonsai specimens. In dry regions, the baobab plays a vital role in water storage; a hollowed trunk may be carved out in 3 – 4 days. A medium-sized tree may hold 400 gallons while a large tree could contain over 2,000 gallons, and water stored in them is said to remain sweet for several years if the hollow is kept well closed The flowers emit what some describe as a strong carrion smell, which is presumably attractive to the bats. Optimal spacing is thought to be 20 to 30 m apart. Suitable for xeriscaping. Trees produce fruit after 2 to 15 years.

Propagation: Seed is sow in containers. Germination is usually 90-100% and takes 1-3 months at 21c. Germination is more rapid and successful if the seeds are first nicked or boiling water is poured on them, after which they are left to soak for 24 hours. Soaking in water overnight softens the seed coat and makes water absorption for germination easy. When the seed coat is nicked it may take only 6 days to germinate, though it is more likely to be 15 – 40 days. It is preferable to sow the seed directly into the soil. When seedlings emerge it is best to shade them for 8 days, then provide half shade for 4 – 7 days before exposing them to full sun. Seedlings need to be 3 – 4 months old, reaching a height of 40 – 50cm, before transplanting. The seed can be stored for at least 4 years at room temperature with no loss of viability. Seeds per kg: 2500. Plants can also be grown by cuttings.

Adansonia digitata – L.
Baobab, Judas Fruit, Monkey Bread Tree
A deciduous Tree growing to 20 m (65ft) by 15 m (49ft) at a slow rate.
Family: Malvaceae
USDA hardiness: 10-12
Known Hazards: The bark is boiled for days to extract a substance poisonous to ants.
Habitats: Characteristic of thorn woodlands of the African savannahs, which are characterized by low elevations with 4 – 10 dry months a year split into 1 or 2 periods.
Range: Tropical Africa – Mauritania to Sudan, south to Angola and Tanzania.
Soil: Suitable for: light (sandy), medium (loamy) and heavy (clay) soils, prefers well-drained soil and can grow in nutritionally poor soil.
pH: acid and neutral soils and can grow in very acid soils.
Light: It cannot grow in the shade.
Moisture: It prefers dry or moist soil and can tolerate drought.
The plant is not wind tolerant.
Edible Rating: 3
Medicinal Rating: 3
Other Uses Rating: 4 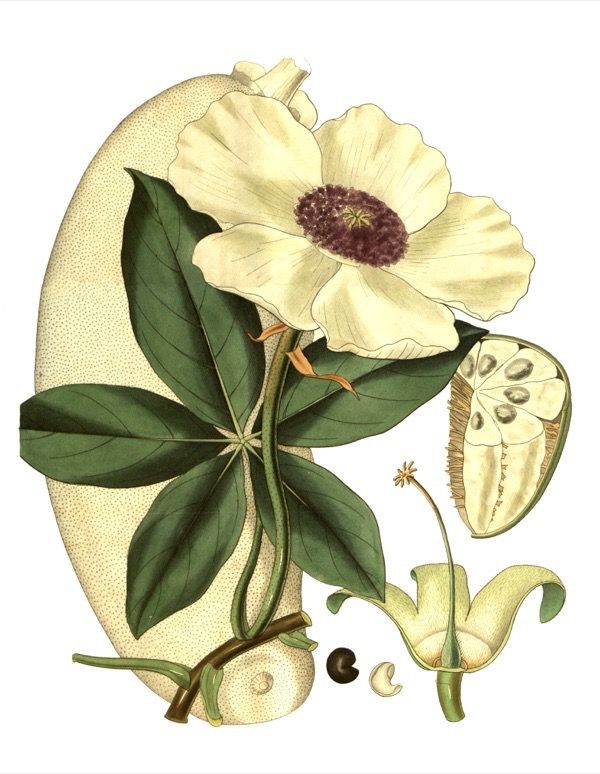 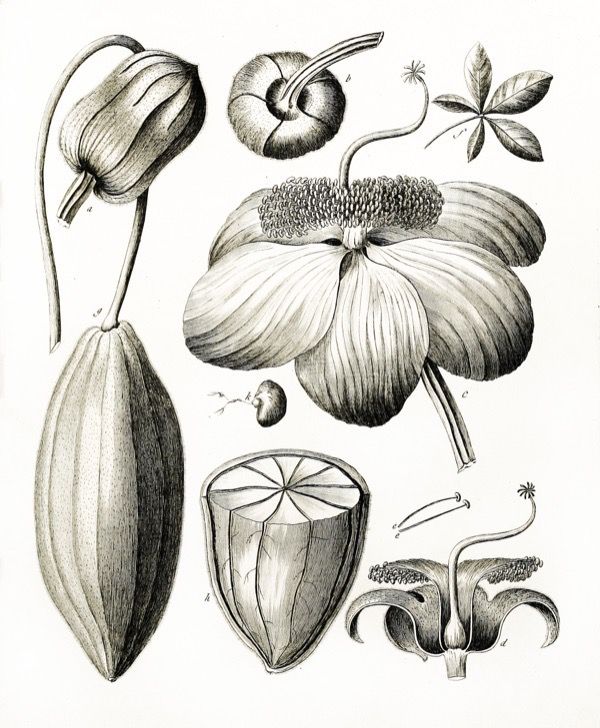